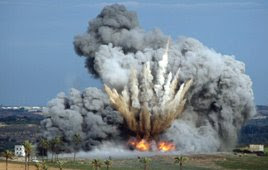 According to a Tundra Tabloids’ source, IDF/IAF reservists are being called up for active duty. Looks like the perverbial sh*t is about to hit the fan. KGS

Following a weekend of rocket fire on Ashkelon and other areas of the western Negev, Prime Minister Ehud Olmert said on Sunday that Israel would not tolerate the escalation and would employ a wide array of measures in order to end the threat on southern Israel.

“Terrorists, led by Hamas, are trying to recuperate from the hard blow of Operation Cast Lead, and are doing this in the only way they know how to – through terror,” he told ministers at the start of the weekly cabinet meeting.

“The Israeli government has formulated policies and a unanimous decision has been made by the cabinet according to which, should the rocket fire continue, we will respond in a serious, painful, strong and uncompromising way,” Olmert continued. “The cabinet’s decision will be carried out until the terror organizations understand that Israel is not willing to accept their way.

“Israel has a wide range of options which can be used and these options will be utilized until total quiet is brought to the South,” he added.

On Friday and Saturday, at least eight rockets struck various areas of the western Negev, including one that hit a school in Ashkelon. Nobody was wounded in any of the attacks, but various buildings sustained extensive damage.