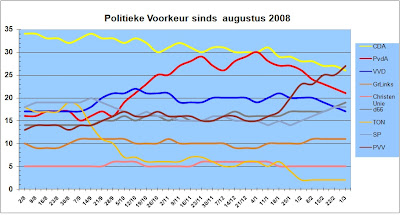 Gates of Vienna: I reported a couple of weeks ago that Geert Wilders’ political party, the Partij Voor Vrijheid (PVV), had risen to second place in the wake of its leader’s prosecution for hate speech and his subsequent denial of entry into Britain. The mid-February political polls indicated that if the election were held then, the PVV would have won 25 seats, and was now the second most popular party in the Netherlands.

The steep slopes on the graph back then indicated that the trends were far from leveling off. Since then Geert Wilders has made his historic visit to the United States and screened Fitna in the Senate, raising his stature as a political leader and dispelling the media caricature of a “right-wing extremist” and “publicity hound”.

And now it seems the Dutch people have decided that they like what they see. In just two weeks, according to the latest polls, the PVV has become the most popular party in the Netherlands, and would gain 27 out of 150 seats if an election were held today. In a field of eleven major parties, this is an impressive achievement.

The folly of the current political leadership in the Netherlands and the UK is thus exposed. Geert Wilders would be Prime Minister of Holland if the system functioned properly. But instead his own government is putting him on trial, and the British government refuses him entry, all because the political establishment goes about trembling in abject fear of Muslim reactions to the plain truth.

According to Dutch opinion polls, if parliamentary elections were held today the Freed Party (PVV) of populist leader Geert Wilders would become the largest party. The PVV has 27 seats in the polls, while the Christian Democrats — the largest party in the governing coalition — has 26.

He has been rising in the polls since the Amsterdam appeals court decided to try Wilders for anti-Muslim comments six weeks ago. He was also in the news because Great Britain denied him entry.

GeenStijl has reported on this sensational news, and sends Geert Wilders its congratulations.