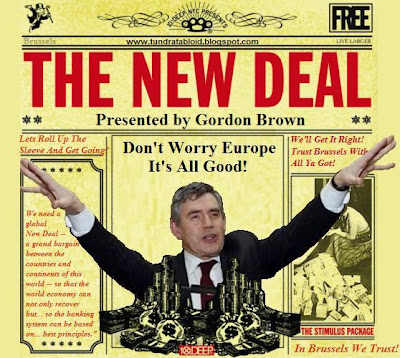 Gordon Brown: “Come on in Obama, the water’s fine!”

What’s one to expect from Socialists anyways? Whether they live on 10 Downing Street or 1600 Pennsylvania Ave, they all have an eye on control, that’s the common thread that binds them all together. Brown’s New Deal will be as bad for the economy as Roosevelt’s, and yet the nations roar, bring it on! Idiots, all of them. KGS

GORDON BROWN hopes to forge a partnership with President Barack Obama in Washington this week, to call for a “global new deal” to lift the world out of recession. As he prepares for his first White House visit since the president’s inauguration, the prime minister has hinted that he is ready to make further tax cuts to boost the UK economy.

Brown will meet Obama on Tuesday and address a joint session of Congress on Wednesday. Aides say he has both to demonstrate to a sceptical British public that he commands the respect of the president, and to persuade the American political establishment that global action is needed to rescue the US economy. Brown is under pressure to persuade American political leaders to sign up to bold aims for the G20 summit of industrial and leading developing nations, which is to be held in London next month.

The prime minister will borrow from the rhetoric of Franklin Roosevelt, who introduced the government-financed New Deal to tackle the US Depression of the 1930s. He will argue that his 21st century “global new deal” will also require public spending on a huge world-wide scale.

Writing in The Sunday Times today, Brown calls for “universal action to prevent the crisis spreading, to stimulate the global economy and to help reduce the severity and length of the global recession”.

His stress on continued economic “stimulation” will increase speculation about next month’s budget. No 10 sources said that, while no final decision had been taken about further tax cuts, the prime minister would do “whatever it took” to pull the UK out of recession.