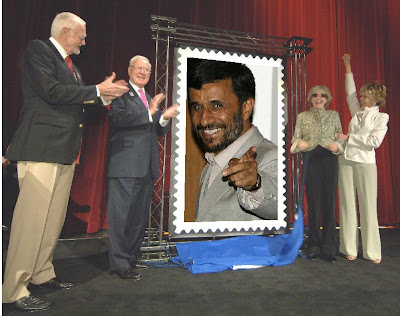 The Academy of Motion Picture Arts and Sciences applaud a genocidal villian.

Sharansky: He (Jackson) viewed the Soviet regime’s embrace of détente as a change in tactics meant to avoid competition with the West rather than as a commitment to peaceful coexistence.

Both Jackson and Sharansky are right. Cultural exchanges between the West and brutal totalitarian regimes only serves the purposes of the regime itself, and not the people forced to bear the burden of living under its rule. I see no reason why the West should encourage Iran, and its evil leadership, that has openly called for the genocide of Israel. The Left has learned absolutely nothing. KGS

Hollywood team of Leftist Morons in Iran on cultural exchange

A top-level team from the Hollywood movie industry traveled to Iran on a non-government mission, for a weekend of cultural and creative exchange meetings, the Academy of Motion Picture Arts and Sciences said Friday. “I can confirm that a group of Academy members … are currently in Iran” on a “completely private initiative for educational and creative exchange and with no political agenda,” AMPAS director of communications Leslie Unger told AFP. She confirmed Iranian media reports saying the delegation included AMPAS president Sid Ganis, former president Frank Pierson, actress Annette Bening and producer William Horberg. “The Academy group did receive visas and is currently in Tehran,” Unger said.

NOTE: AMPAS: Association of Moronic Pompous Asses and Scum. Those that pander to the Iranian regime, should be made aware that their choice comes with a cost. KGS