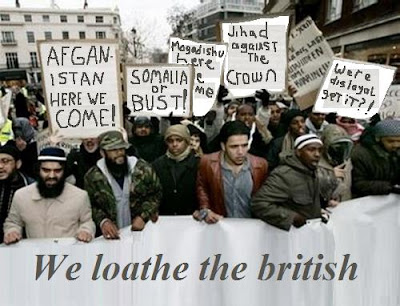 Now they fight againt the Crown

British soldiers are engaged in “a surreal mini civil war” with growing numbers of home-grown jihadists who have travelled to Afghanistan to support the Taliban, senior Army officers have told The Independent.

Interceptions of Taliban communications have shown that British jihadists – some “speaking with West Midlands accents” – are active in Helmand and other parts of southern Afghanistan, according to briefing papers prepared by an official security agency.

The document states that the numbers of young British Muslims, “seemingly committed jihadists”, travelling abroad to commit extremist violence has been rising, with Pakistan and Somalia the most frequent destinations.

That’s right, British Muslims fighting against the Crown in Afghanistan, how disloyal can you get? But that’s not all, Somalis living in Britain have returned to Somalia to help out in the jihad. The Tundra Tabloids reported back in 2006, that Somalis in Finland were also quietly finding their way back to Somalia during the Ethiopian assault on the ICU. Somali refugee, Idris Hassan Farah, stated back then during a YLE interview:

YLE reporter, Ahti Kaario: “Are Somalis in Finland leaving for Somalia to fight?”

Kaario: Do you know anyone?

Farah: “If I know I won’t be telling. But of course I do know who, but I won’t tell who they are but they are going and to do battle. We have the right to go and fight…!”

The Jihad has a strong pull on the young, especially when its being preached as a valid concept in the modern age. KGS