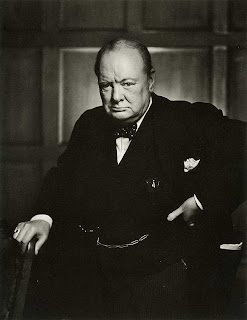 OK, it was only on loan to the White House, but the Brits offered it to B.O for another four years, his reply was: Thanks but no thanks”. Here is what Frank Gaffney for the Center for Security Policy has to say about it.

It is no secret that Team Obama is all about symbolism and messaging. So presumably it was no accident that one of the new president’s first gestures was to have a bust of Winston Churchill given to the United States by the British government removed from the Oval Office.

Mr. Obama didn’t have it relocated to another prestigious location in the White House complex – say, the Cabinet Room or even the First Family’s residence. Neither did he choose to put it on display in the Smithsonian, where this likeness of the greatest honorary American could have been enjoyed and revered by the rest of us. No, President Obama had it sent back to the Brits, who would be entitled to feel offended as well as appalled.

If indeed this explicit disassociation with one of the iconic heroes of the last century was meant to convey a symbolic message, the question occurs: precisely which message – and for whom was it intended?

Several possibilities come to mind. During his long career in various positions in the British government, Winston Churchill was closely associated with his nation’s empire and worked manfully to preserve it as the sun began to set on its imperial holdings. Thanks to his own life experiences – notably, his Kenyan father and a formative stay in Indonesia – Mr. Obama clearly identifies with those colonized, rather than the colonizers. Perhaps, he wanted to serve notice of his solidarity with Mahatma Gandhi and the other anti-imperialist revolutionaries who struggled against Churchill and his government.

Alternatively, the banishing of the Churchill bust may have been part of the new President’s campaign to “respect” Islam. After all, the former prime minister took a dim view of the Koran and adherents to the brutally repressive theo-political-legal program its authorities call Shariah.

Notably, Mr. Churchill wrote that Hitler’s Mein Kampf was “the new Koran of faith and war: turgid, verbose, shapeless, but pregnant with its message.” (Interestingly, Dutch parliamentarian Geert Wilders – who will be in Washington later this week to meet with Members of Congress, attend the Conservative Political Action Conference and hold a press conference – is currently being prosecuted by his government for having made a film, Fitna, that reached a similar conclusion.) Clearly, Churchill’s was not the sort of submissive “respectful language” Mr. Obama is promoting, perhaps with a view to beginning prosecutions here of those he, or others, consider to be “Islamophobes”?

Even more worrisome is the possibility that Mr. Obama feels uncomfortable having Churchill looking down on him as he directs the United States to engage in the sorts of policies that Sir Winston inveighed against during the decade of the 1930s, that came to be known as his “wilderness years.” It was during the premierships of Stanley Baldwin and Neville Chamberlain that Mr. Churchill became the personification of opposition to policies of appeasement and surrender, of weakening friends and emboldening enemies.

In the month that has elapsed since the Obama presidency began, a pattern has set in that Sir Winston would have recognized, and abhorred. Space limitations will permit a discussion of just two recent examples:

Durban II: Last week, the State Department announced that the United States would send a delegation to participate in the preparatory conference for the upcoming international meeting to review the UN Conference on Racism held in Durban, South Africa in 2001. As the redoubtable Anne Bayevsky and Claudia Rosett have reminded us, the original conclave served up a toxic brew of anti-Israel slander, virulent anti-American sentiment and early efforts to impose Shariah blasphemy laws by criminalizing “hate speech” that offends Muslims.

Absolutely no good can come of the reprise slated for Geneva in April that is universally known as “Durban II.” With the UN diplomatic deck stacked as ever against us, President Obama’s embrace of the notion that U.S. participation in that event, or even its preparatory sessions, will do other than legitimate the worst of our foes and undermine our friends constitutes foreign policy malpractice.

Shariah for Afghanistan: Also last week, the failing state of Pakistan forged a separate peace with the Taliban in the Swat Valley, an area of the country’s Northwest Territories that was once a tourist destination. Now, with the assent of the government in Islamabad, its people will henceforth be ruled according to Shariah. Women will be confined to their homes, girls will go uneducated, boys will only learn the Koran and their responsibility to engage in jihad and those who don’t conform will be beheaded, stoned, flogged or mutilated.

If this act of what amounts to surrender by our “ally” to the Taliban were not bad enough, Secretary of Defense Robert Gates – the “centrist” whose retention by President Obama gave hope to many worried about the latter’s policy proclivities – made a stunning announcement: At the end of a NATO meeting, Mr. Gates declared that Washington could live with a similar arrangement in Afghanistan. The unmistakable message: It is just a matter of time until the Taliban sweeps away any vestiges of modernity and hope for the Afghan people and the West is routed.

Perhaps Mr. Obama will ask Her Majesty’s Government for a bust of Neville Chamberlain to adorn the Oval Office?

Frank J. Gaffney, Jr. is President of the Center for Security Policy and a columnist for the Washington Times.