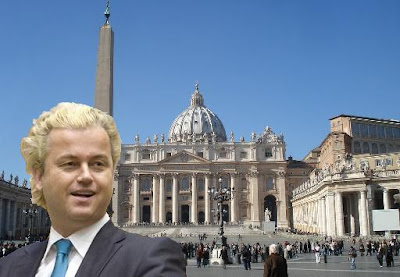 As you perhaps know, Oriana Fallaci is one of my heroes. She definitely was one of the greatest examples of bravery and honesty. Her brilliant books ‘The Rage and the Pride’ and ‘The Force of Reason’ are my guidelines that inspire me day after day. Mr. Manocchia, Una via per Oriana, thank you very much for remembering the great Oriana Fallaci. The world should remember her forever.

Ladies and gentlemen, following in the footsteps of Oriana Fallaci, I want to warn you for a great threat. This great threat is called Islam.

Islam is build on two rocks. First there is the Koran, Allah’s personal word, with orders that need to be fulfilled by Muslims regardless of place and time. As you know, the Koran calls for hatred, violence, submission, murder, terrorism, war, Jihad. The Koran calls upon Muslims to kill non-Muslims and he Koran considers Jews to be monkeys and pigs. That is why the great German philosopher Arthur Schopenhauer called the Koran inferior. That is why former British Prime Minister Winston Churchill and Oriana Fallaci compared the Koran to Adolf Hitler’s Mein Kampf.

Second, there is the so called perfect man: Muhammad. His deeds have to be imitated by all Muslims, and since Muhammad was a warlord and executed prisoners of war we know exactly what to expect. The brave American apostate dr. Wafa Sultan said: “The problem is that the Koran clearly says that Muhammad should be a role model for every Muslim. You are not allowed to criticise him, but you should follow in his footsteps. As a Muslim it is your mission to spread Islam by the sword”.

Please, ladies and gentlemen, let no one fool you: Islam means submission, so there cannot be any mistake about its goal. There are moderate Muslims, but there is no moderate Islam.

A total of 54 million Muslims live across Europe. In less than half a century the number of Muslims has increased rapidly. The Islamization of Europe affects the European achievements of the last century. The question is: Are we prepared to defend our achievements? Are we prepared to defend the equality of men and women? Are we prepared to defend the equality of homo- and heterosexuals? Are we prepared to defend the separation of Church and State? Are we prepared to defend freedom of speech?Ladies and gentlemen, I would not qualify myself as a free man. Four and a half years ago I lost my freedom. Since then I am under 24-hour police protection. As if that is not enough, the most radical Dutch Imam claimed 55.000 euro’s in compensation for his hurt feelings because of ‘Fitna’. The State of Jordan is possibly going to issue a request for my extradition to stand trial in Amman. The Amsterdam Court of Appeal ordered my criminal prosecution for making ‘Fitna’ and for my political views on Islam. And last week the British government refused my entrance into the United Kingdom because me showing ‘Fitna’ in the British House of Lords at the invitation of a British parliamentarian would be a threat to British public security. This is the alarming state of freedom of speech in today’s Europe: Criticizing Islam has become a dangerous activity, criticizing Islam has apparently become a criminal act.

The Court’s decision and my ban by the British government are also two major victories for all those who hate freedom of speech.

Freedom of speech – the dearest of our liberties – is under attack in today’s Europe. Oriana Fallaci herself had to live in fear of extradition to Switzerland because of her book ‘The Rage and the Pride’. Recently, Susanne Winter, an Austrian politician, was sentenced to a suspended prison sentence for telling the truth about Muhammad. The Dutch cartoonist Gregorius Nekschot was arrested by ten police men because of his drawings, and on top of all that, we now have the decisions of the Inquisition-like Court in Amsterdam and the Dhimmi British government.

Freedom of speech is no longer a given in Europe. What we once considered to be a natural component of our existence is now something we have to fight for. That is what is at stake. Whether or not I end up in jail is not the most important issue. The question is: Will free speech be put behind bars?

I repeat the words inscribed on the headstone of the murdered Dutch anti-Islam politician dr. Pim Fortuyn, who lies buried here in Italy and would have celebrated his birthday today: ‘loquendi libertatum custodiamus’, let us guard freedom of speech.

That is why I propose the withdrawal of all hate speech legislation in Europe. I propose a European First Amendment. Freedom of speech is the keystone of our Western civilization, it is the keystone of our democracies and the keystone of our freedom. That is why freedom of speech should be extended instead of restricted. Salman Rushdie’s ‘The Satanic Verses’, Ayaan Hirsi Ali’s and Theo van Gogh’s film ‘Submission’, Kurt Westergaard’s cartoons and my documentary ‘Fitna’ should never be banned, but should be protected. As George Orwell once said: “If liberty means anything at all, it means the right to tell people what they do not want to hear”.

Ladies and gentlemen, it is five to twelve. In Europe, our freedom is at stake. Islam is Europe’s Trojan Horse. The differences between Saudi-Arabia and the Netherlands, between Iran and Italy are blurring. The first Islamic invasion of Europe was stopped at Poitiers in 732. The second Islamic invasion was halted at the gates of Vienna in 1683. Now we have to stop the current – stealth – Islamic invasion. Ladies and gentlemen, once Islam conquered Constantinople, now it wants to conquer Rome. We have to stop the Islamization of Europe, because if we don’t, Europe will become Eurabia.

Fortunately there is some hope. This hope does not come from governments, but from the people. In the Netherlands, 60 percent of the population considers mass immigration to be the number one policy mistake since the Second World War. Another 60 percent sees Islam as the biggest threat to our national identity. I am convinced that the public opinion in the United Kingdom, Germany, France, Spain and here in Italy isn’t much different.

As Oriana Fallaci once said: “The moment you give up your principles, and your values, you are dead, your culture is dead, your civilization is dead”.

Thank you very much.

Here is a video of Geert Wilders receiving the Oriana Fallaci award. It’s about a minute and a half presentation and all of it in Italian.KGS

UPDATE: Read what Andrew Bostom has to say about it, here.