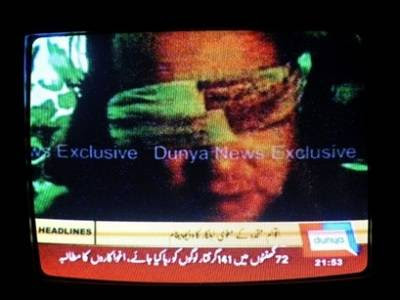 “This photo released by the Baluch United Liberation Front (BULF) shows a television screening footage from Dunya News private television, allegedly shows John Solecki, head of the UN refugee agency (UNHCR) kidnapped and blindfolded by BULF in an undisclosed location in the Baluchistan provincial capital Quetta.”
The brutal handling and eminent murder by decapitation of a UN official, John Solecki, at the hands of these followers of the prophet of Islam, should be more than enough reason for prominent leaders and scholars throughout the Islamic world, to condemn the “Jihad Ideology and Sharia” once and for all as being un-Islamic. Crickets chirping.
Kidnappers threaten American abducted in Pakistan

“QUETTA, Pakistan – Kidnappers threatened on Friday to kill an American employee of the United Nations within 72 hours and issued a grainy video of the blindfolded captive saying he was “sick and in trouble.” A letter accompanying the video delivered to a Pakistani news agency said the hostage, John Solecki, would be killed unless authorities released 141 women it said were being held in Pakistan.
The video and the demands indicated that Solecki, the head of the U.N. refugee agency in Quetta, a city near the Afghan border, was alive and that his captors wanted to negotiate.
Solecki, who appeared blindfolded and with a shawl draped over his shoulders in the 20-second clip, said his message was addressed to the United Nations. “I am not feeling well. I am sick and in trouble. Please help solve the problem soon so that I can gain my release,” he said

What’s it going to take to get the majority of Muslims to officially demand the reformation of their medieval religion? Muslims scream “most of us are moderates”, but when push comes to shove, where are these moderates when it comes to sharia and the jihad ideology, just how deep does that soft moderation really go before you hit hard rock Islamic fundamentalism?That’s the conundrum in the equation, people can scream of their moderation but yet remain notably silent to the oppressive and beastly acts carried out in the name of jihad. Perhaps most Muslims around the world do in fact reject Sharia law, but why all the silence to the slow creeping of it into every day life in Western society? Just wondering about all that. KGSVia the Sheik and Atlas Shrugs