Prominent Muslim cuts off wife’s head, what’s the world of moderate Muslims to think, when one of their own acts out the violence in the Koran and Hadiths? 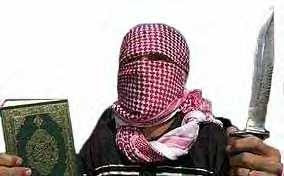 “Authorities say Aasiya Hassan recently had filed for divorce from her husband. “She had an order of protection that had him out of the home as of Friday the 6th [of February],” Benz said….”
And a lot of good that order of protection did for her. KGS
Prominent Orchard Park man charged with beheading his wife
Orchard Park police are investigating a particularly gruesome killing, the beheading of a woman, after her husband — an influential member of the local Muslim community — reported her death to police Thursday. Police identified the victim as Aasiya Z. Hassan, 37. Detectives have charged her husband, Muzzammil Hassan, 44, with second-degree murder.
(TT: Only second degree murder?)
“He came to the police station at 6:20 p.m. [Thursday] and told us that she was dead,” Orchard Park Police Chief Andrew Benz said late this morning. Muzzammil Hassan told police that his wife was at his business, Bridges TV, on Thorn Avenue in the village. Officers went to that location and discovered her body.
Muzzammil Hassan is the founder and chief executive officer of Bridges TV, which he launched in 2004, amid hopes that it would help portray Muslims in a more positive light. The killing apparently occurred some time late Thursday afternoon. Detectives still are looking for the murder weapon. “Obviously, this is the worst form of domestic violence possible,” Erie County District Attorney Frank A. Sedita III said today.
Via: Jihad Watch