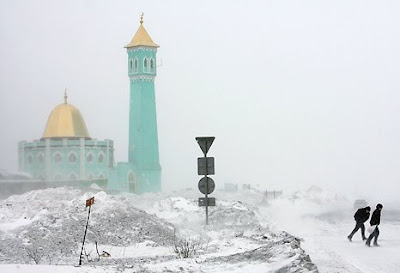 Islam in Russia: Islam and Muslims pose a serious challenge

Islam and Muslims in Russia pose a serious challenge to Russia’s internal stability and domestic policy. After the collapse of the Soviet Union the self-esteem and sense of identity of Russia’s 20 million Muslims have been bolstered. In 1991 there were approximately 300 mosques in Russia; the present number approaches 8 000. Half of the new mosques have been built with foreign financing, mainly from Turkey, Iran and Saudi Arabia. In 1991 there were no Islamic schools in the Russian Federation. Now there are approximately 60 madrassas, attended by some 50 000 students.
Percentagewise, the largest Muslim populations are in the Volga-Ural region, Bashkorstan, Tatarstan, the North Caucasus and the Karelian Republic. In the Karelian Republic there are some 20 000 Muslims (3 % of the population).32
Another striking statistic is related to the growth of Russia’s Muslim population. Russia is about to face big demographic challenges. Russia’s population is diminishing by approximately 400 000 persons per year; yet, the population in 15 Russian regions increased in 2005. Each of them, such as Chechnya, Dagestan and Ingushetya in the North Caucasus has sizeable Muslim populations. The life expectancy among Muslim males is far greater than that of ethnic Russians.33
Paul Goble, an expert of Islam and the Muslim populationin Russia, estimates that the majority of Russian military recruits will be Muslims in 2015. In 2020 twenty per cent of the citizens will be Muslims, provided that the current demographic trends continue. If no changes occur, within three decades the majority of the citizens of the Russian Federation will be Muslims. Russian Muslims are a very heterogeneous group, ranging from Volga Tatars and multiethnic groupings in the North Caucasus to the new immigrants from the former Soviet republics in Central Asia.
Yet, they share one common denominator: their birth rates exceed that of the Slavic population.34 Looking at the statistics it becomes perfectly clear that Russian Muslims are going to play an important role in the future. This will not affect domestic policy only, but will also have an effect on foreign policy. Although Russia is an observer at the Congress of Islamic Organisation, its Iran policy also reflects Russia’s internal differences of opinion. On the one hand Russia seeks cooperation and shared interests but, on the other hand, it is wary of the Islamic world and sees itself, first and foremost, as a European state.
The status of Islam and Muslims has greatly suffered because of the Chechen Wars. Most Russians equate Islam with terrorism, which is also an impression partially sustained by the government-controlled media. The growing xenophobia among ethnic Russians may result in local tensions with the Muslim population. The position of Muslims in predominantly ethnic Russian areas is not enviable.
Especially the Caucasians, regardless of their religious affiliation, face discrimination and persecution. Demographic changes and higher birth rates in Muslim areas instil fear in Russia, causing people to believe that Russia is gradually becoming an Islamic country.
This has resulted in problems with obtaining building permits for mosques as well as in racist aggression. The most worrisome feature is the increasing violence towards the Muslim population. Vandalism against mosques has increased throughout this decade. In 2006, an Imam was shot dead at his doorstep in the city of Kyslovodsk. Among other things, the increasing role of Islam in society was thought to be a motive for the murder. These types of ethnic tensions also caused the Kondopoga riots in the Karelian Republic in 2006.
In spite of all this, Russia’s Muslim community is convinced that Muslims and Islam are part of the Russian identity and that they have a place in Russia. After all, as early as 922 Russia had its first Muslim nation, the Volga Bulgars. Umar Idrisov, head of the Muslim Religious Directorate in the Nizhniy Novgorod region, was asked whether a future President of the Russian Federation could be Muslim. He replied, “I may not live long enough to witness the wonderful miracle but I hope that, sooner or later, it will happen.
Russia emerged from two civilizations – the Turkish and the Slavic, Islamic and Christian. The first state religion in the area of Russia was Islam, so why couldn’t Russia have a Muslim president?”

NOTE: What’s noteworthy is the report’s attempt to put a positive spin on the “serious challenge” a Muslim majority Russia would pose for the Russian state, and the West as well. Cognitive dissonance in full display, or a severe case of political correctness, or both? There are very dark clouds on the horizon for Europe every which way you look.

It’s encouraging that the Finnish Defense Ministry is actually looking at the rise in Muslim demographics as a possible “serious challenge”, but then it wastes the opportunity on wishfull thinking, insteading of shouting DANGER-WARNING-TURN BACK-DON’T DO IT.