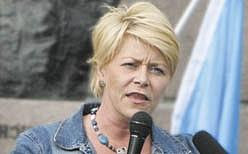 It’s that bad in Norway, if you stand up for Israel, you life is going to be in danger. Why all the insanity, does it stem from a gross lack of knowledge of what actually the conflict between Israel and the Arabs is all about, or is it something even deeper?
Dr.Manfred Gerstenfeld sends the Tundra Tabloids the following article from Troi Cheifetz that appeared in the J’Lem Post.
Norway’s pro-Israel opposition leader under 24-hour guard

“Norway, a country that used to be very pro-Israel, has turned into one of the most anti-Israel countries in Europe today,” within both government and public opinion. That’s according to Dr. Asle Toje, a researcher at the BI Norwegian School of Management and foreign policy adviser to the Progress Party of Norway (Fremskrittspartiet).

Toje is a staunch advocate of Siv Jensen, chairwoman of the main opposition Progress Party, who has recently come under fire for her pro-Israel stance. Following her appearance at a pro-Israel rally in Oslo on January 8, Jensen began receiving death threats, and is now under 24-hour security supervision.

“I have never experienced this kind of hatred in Norway,” said Toje, who was present at the demonstration. “There were people throwing stones at and spitting on rally-goers. Afterward, people carrying Israeli flags were randomly attacked in the streets.” Along with expressions of support for Israel, speakers at the rally, including Jensen, called for aid to be distributed in Gaza and for a cease-fire agreement to be signed. “It was a peaceful rally,” said Toje. “Jensen was calling for the same things as Barack Obama. The difference is that she was doing it in Norway. The environment here is different.”

The Socialist Left Party (Sosialistisk Venstreparti), which is part of the current coalition, has proposed a number of boycotts against Israel since the government was formed in 2005. “The first was a general boycott,” said Toje. “Next came an academic boycott and then a boycott on arms.” The boycotts, though not implemented, have exacerbated an already hostile atmosphere. Israeli/Nazi comparisons and anti-Semitic incidents are now commonplace, Toje said.

On January 21, Etgar Lefkovits reported in The Jerusalem Post on an e-mail sent out by Trine Lilleng, a senior Norwegian diplomat based in Saudi Arabia. “The grandchildren of Holocaust survivors from World War II are doing to the Palestinians exactly what was done to them by Nazi Germany,” Lilleng wrote.

Foreign Minister Jonas Gahr Støre (Labor), in his recent memoir, To Make a Difference, makes an implicit comparison, noting, when writing of Hebron: “Most of the shops have been shut down. The shudders have been bolted and are marked by signs from the Israeli police. They are marked, as other shops have been marked at other places and at other times.”

In August 2006, Jostein Gaardner, an esteemed Norwegian author and a friend of Støre’s, published an op-ed in the Aftenposten daily under the headline, “God’s chosen people.” Gardner wrote, in reaction to the Second Lebanon War, “We don’t believe in the notion of God’s chosen people. We laugh at this people’s capriciousness and weep at its misdeeds. To act as God’s chosen people is not only stupid and arrogant, but a crime against humanity. We call it racism.”

A week later, Gaarder penned another op-ed, expressing his “regret if I have hurt anyone – though I intended and still intend to be harsh in my critique of the State of Israel.” In September 2006, 10 shots were fired at an Oslo synagogue, but no one was hurt. The shooter, Arfan Bhatti, “wished to kill women and children coming out of the synagogue,”Aftenposten reported.

You get the picture. It’s the TT’s opinion that the news media bears the greater responsibility for the demonization and incitement of the Jewish state of Israel, through its continual biased reporting against Israel and propagandizing for the Palestinians. More here. KGS