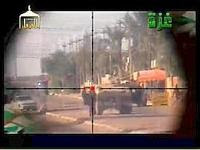 No, they could care less who gets shot, they just want Muslims to kill the infidel, even if it’s one bullet at a time. KGS

Baghdad, 28 Jan. (AKI) – – A new video purportedly from Al-Qaeda in Iraq urges Muslims to become snipers in order to avenge the Palestinian deaths caused by Israel’s three-week offensive in the Gaza Strip.
The 30 minute documentary, entitled “From the Islamic State: Dedicated to Gaza, the courageous,” underlines the military and religious aspect of a sniper in Islam. It begins by showing images of the Israeli bombardment of Gaza, while images of Arab heads of state are seen cheering after a raid.
The aim of the video – produced by production house al-Furqan – is to invite Muslims from all over the world to do the same and kill the first unbeliever that crosses his path. “You must know that with a bullet whose cost does not exceed one dollar, you can kill a person who gets paid much more by their country. “
If you feel that your heart is being squeezed and you are sorry about what is happening to Muslims, become a sniper and learn how to become one. Then approach God’s enemy and his closest prophet and put a bullet in his heart or head and you will see how much better you feel,” said the message.