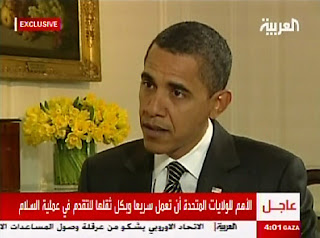 Al Arabiya: In his first interview with an Arab television station, United States President Barack Obama Monday told Al Arabiya that Americans are not the enemy of the Muslim world and said Israel and the Palestinians should resume peace negotiations.“My job to the Muslim world is to communicate that the Americans are not your enemy,” Obama told Al Arabiya’s Hisham Melhem in an interview broadcast Tuesday morning.
During the presidential election campaign last year, Obama vowed to improve U.S. ties with the Muslim world and after he won promised to give a speech in a Muslim capital in his first 100 days in office. The President repeated this pledge in the interview but did not give a time or specify the venue.

The President repeated a pledge to adress the Muslim world from a major Islamic city
Obama pointed out that he had lived in the world’s largest Muslim nation, Indonesia for several years while growing up, and said his travels through Muslim countries had convinced him that regardless of faith, people had certain common hopes and dreams.
In the interview, Obama called for resumed negotiations between Israel and the Palestinians and said his administration wanted to begin by listening and talking to all parties involved in the conflict without prejudging their concerns.
Great. President BO prostrates before the Muslim world, as if it will really work towards the US’s self interests down the road. Gee, the TT wonders whether the city from which Obama will address the Muslim world will be from Mecca? If that’s the case….Gothcha! KGS