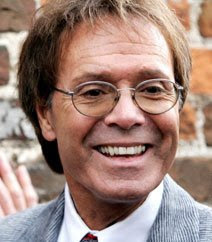 They are indeed easily pissed off are they not? No, it’s not for getting a cross eyed stare, its because of Cliff Richard’s version of the Leonard Cohen song, Hallelujah, that was enough to set off the followers of the madman. They’re seething, spitting mad.
Daily Mail: The shocked owner of a radio station whose website has been hijacked by Muslim extremists believes it was targeted because they played a song by Cliff Richard.
Hackers removed the station’s home page and replaced it with haunting images and a message said to be on behalf of Ahmed Al-Qahtani – a suspect in the 9/11 attacks. Radio Basingstoke owner and DJ Astrid Haigh-Smith was horrified to find her website pictured a spooky pair of green eyes above a woman on an altar.
The message, which was written in green on a black background, called on God to bless Muslim fighters, or Moujahidines, and warned the West not to insult Islam. But Ms Haigh-Smith, 53, says she will not allow the fanatics to intimidate her and insists she will not change the station’s playlist.
The station, whose website had 140,000 hits last month, expressed their support for British troops over Christmas and played Cliff Richard’s version of Hallelujah. The ageing popstar is famous for being a Christian and the Leonard Cohen song was Christmas number one for X-Factor winner Alexandra Burke.
Ms Haigh-Smith said: ‘When I realised what had happened, I was quite frightened and the hairs on the back of my neck stood up. ‘I couldn’t understand why we had been targeted. ‘I just thought maybe it was because we had commented that we hoped our troops would be safe over Christmas.‘We’ve also played the Cliff Richard version of Hallelujah, but we would never dream of running down any religions.
‘I’m not going to change what songs we play. If we start doing things like that then the terrorists will have won.’
A small station like Radio Basingstoke shows true British backbone, and the way forward, in its refusal to act like its cowering dhimmi government on Downing Street, in the face of Islamic intimidation. Remember folks, it’s going to be left up to the average citizen to resist Islamization, not the government. Kudos to the radio station owners for showing what once made Britain great. KGS