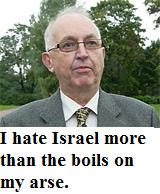 While the Israeli MFA has succeeded in getting its own talking points across to the public at large, the Finnish media’s flagship organizations are not liking it one bit. They are seething mad that the public isn’t as/more enraged than they are, so off comes the gloves.
The Helsingin Sanomat comes out swinging with a bigoted column by Olli kivinen, someone with whom the TT has traded exchanges with in the past. What the man lacks in knowledge of the Arab-Israeli conflict, is matched only by his lack of common sense in knowing when he has crossed the lines of criticism, and ventured into the area of anti-Semitism. Now on to the bigoted and highly challenged thinking of the numskull called
Olli Kivinen.
In the destroyed ghettos of Gaza