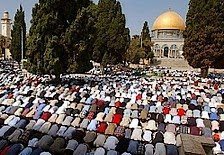 First you pray, then you go out and rough folks up. Gee, I wonder when we last heard of something similar, oh yeah, on New Years Eve in Florida. KGS
Minor clashes follow e. J’lem prayers
J’lem Post: Despite concerns that Gaza violence would spread to east Jerusalem and the Temple Mount in the Old City, Friday prayers at the site passed off relativity peacefully, with only a few minor incidents reported in the area.
Police had restricted access to the Temple Mount to men over 50 and women, and Defense Minister Ehud Barak had declared a general curfew on the West Bank. Following Friday prayers, a policeman was lightly wounded when security forces were pelted with stones in Ras el-Amud, and two Molotov cocktails were hurled at a police station in the east Jerusalem neighborhood. In A-Tur, stones were thrown at police forces that were accompanying a tourist bus. No one was wounded and no damage was reported. One of the suspected stone-throwers was arrested.

Apparently only a few got rowdy, no one was killed or beaten up, so all in all, for the religion of peace, it was a real moderate display of behaviour. KGS