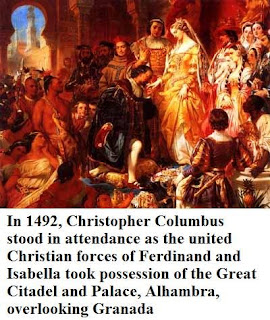 I have seen the following article in different forms here and there in the blogosphere, and wasn’t going to blog about it until I happened to see this particular article along with the observations of Baron Bodissey that accompanied it over at the Gates of Vienna.

The Baron nails it squarely on the head. When it comes to looking at the historical record, only European history commands full attention in regards to religious intolerance, never Islam. Christianity has come to fully recognize its sordid history but the same can’t be said of the followers of the madman, and it doesn’t help bring its adherents any closer to doing so when scientific magazines help propagate the myth of a”friendly Islam”.

Read the following few lines from the Science News article about a new study, which analyzed Y chromosomes from 1,140 men from the Iberian Peninsula. The article by Tina Hesman Saey unloads both barrels against Christian Spain early on, and thanks to Baron Bodissey, we see how religious intolerance is to be only understood in one way, as the sole byproduct of Western civilization.

As many as one in 10 men from Spain and Portugal still carry genetic evidence of North African ancestry, and nearly twice that number had Sephardic Jewish ancestors, reveals a study in the Dec. 12 American Journal of Human Genetics. Those results don’t fit with expectations from the historical record.

Sephardic Jews, who were likely in the Iberian Peninsula since Roman times, were supposed to all have fled the region in the wake of pogroms and persecutions between the early eighth and 14th centuries. In the late 15th century, 160,000 Spanish Jews (Sepharadh is the Hebrew word for Spain) were expelled and then settled in other parts of the Mediterranean.

Moors from northern Africa swept into Spain in 711, colonizing the peninsula and spreading Islam. But during the Spanish Inquisition, Spanish Muslims were driven out or forced to convert in a wave of religious intolerance.

Still, the findings reflect how religious intolerance on the peninsula led to conversion of non-Christian groups and then integration into the larger Christian community, he says.

Yes the article mentions colonization by the Moors, but that fact is softened or rendered moot by the journalist’s insistence that Islam simply….just spread. Without insisting it, though in reality that’s what’s implied, people being colonized are not really being colonized if they willingly accept the invading force’s belief system.
Such a thing of course never happened, the Muslim invaders instituted the system of dhimmitude upon all those who refused to convert to Islam, as well as ensuring that periods of leniency existed so that there would always remain enough dhimmis to keep their coffers from running dry. To learn more, read Dr.Andrew Bostom’s “The Legacy of Jihad” and the “Legacy of Islamic Antisemitism, as well as professor Efraim Karsh’s Islamic Imperialism and the Jews. KGS