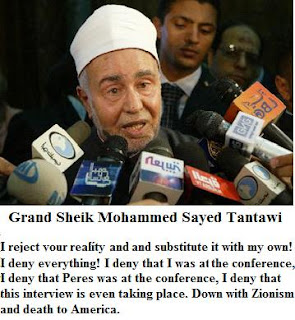 Remember folks, Egypt’s Grand Sheik Mohammed Sayed Tantawi, holds a religious postion that is almost the equivalent to that of the Pope’s in Rome. The man is a moral outrage, as well as a bigot, racist, Infidel-o-phobe, antisemite and a real big lying turd. KGS
Kuwaittimes: CAIRO: Egypt’s leading Muslim cleric Mohammed Tantawi has denied he knowingly shook hands with Israeli President Shimon Peres at a religious conference, saying he did not recognize him, a newspaper reported yesterday.
Pictures of the handshake during a UN-sponsored religious dialogue last month caused a furor in the Egyptian opposition press and demands by an opposition MP that the government-appointed Tantawi be sacked.
Tantawi, who heads the Islamic Al-Azhar University, told Al-Masri al-Yom that he did not know the octogenarian Peres, who has occupied various positions in the Israeli government since its founding in 1948 and is a Nobel peace prize winner.
Those who published the pictures of the handshake were “a group of lunatics,” he added. “I shook his hand without knowing what he looked like,” he said. “The handshake was in passing… because I don’t know him to begin with.