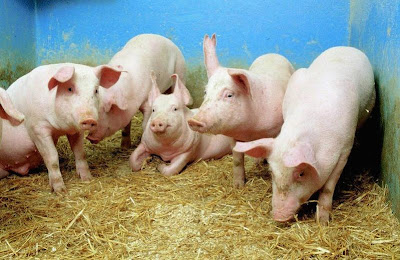 “certain Muslims, who want to live in accordance with the Koran, are more concerned with food in prison than with not committing the criminal acts that send them there.” I couldn’t agree more, Muslims in prison are more worried about offending their religious beliefs than offending society. Here’s a good way to keep them on the straight and narrow path, stay clean and eat Halal, commit crime and go to prison with a healthy appetite. KGS

Aftenbladet : A muslim prisoner at Trondheim prison has reported the prison for discrimination, after muslim prisoners were served pork without being told. Muslims reacted strongly when they discovered they had eaten pork, which is forbidden for muslims. Pork in the sauce «We were given fish in bread-crumbs. While we ate, someone discovered small pieces of pork in the sauce that was inside the fish. Many here pray and practice their religion more than me, and several of them were furious when they found out they had eaten pork,» says the 39.year old Salma to Adresseavisen. He has reported the prison on behalf of himself and the other muslim prisoners. No to special diets MP, Solveig Horne, who is a member of the Justice Committee, says on the party’s home page that special diets behind bars should be refused. «There are already limited resources in the prison unit. We shouldn’t use time, money and energy on making room for special diets for some prisoners, based on religious convictions, culture, or taste buds, for that matter,» she says. Horne thinks that certain muslims, who want to live in accordance with the Koran, are more concerned with food in prison than with not commiting the criminal acts that send them there. Halal-meat for everyone Abid Raja of the Left-Wing Party (Venstre), thinks the most practical thing would be for the prisons to serve only halal-meat. «Norwegians have no problems eating halal-meat. If they want pork, they can have this as an addition,» he says to Dagavisen. no. He points out that pig is shameful for many muslims, and that eating pork for some muslims feels like abuse. More than a third of all prisoners in Norwegian prisons are muslims. There are no prisons in Norway that offer halal-meat to prisoners.