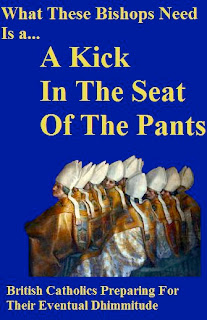 Catholic Bishops in England and in Wales bow to Islam by calling for Catholic schools to accommodate Muslim prayer rooms and religious washing facilities. And while these Bishops are down on the ground groveling before the Islamic community, it would be a most opportune time to complete the spectacle by delivering to each and every one of them a swift kick in the seat of their pants for good measure. Stupid is as stupid does.
Daily Mail.co.uk: Muslim prayer rooms should be opened in every Roman Catholic school, church leaders have said. The Catholic bishops of England and Wales also want facilities in schools for Islamic pre-prayer washing rituals.
The demands go way beyond legal requirements on catering for religious minorities. But the bishops – who acknowledge 30 per cent of pupils at their schools hold a non-Christian faith – want to answer critics who say religious schools sow division.
The recommendations were made in a document, Catholic Schools, Children of Other Faiths and Community Cohesion. ‘If practicable, a room (or rooms) might be made available for the use of pupils and staff from other faiths for prayer,’ the bishops said. ‘Existing toilet facilities might be adapted to accommodate individual ritual cleansing which is sometimes part of religious lifestyle and worship.
‘If such space is not available on a permanent or regular basis, extra efforts might be made to address such need for major religious festivals.’ The Islamic cleansing ritual, called ‘Wudhu’, is carried out by Muslims before they pray.
Wudhu!? Wudhu you think you’re fooling!? Well apparently not everyone, a spark of sanity seen in south London :
Daphne McLeod, a former Catholic head teacher from south London, said it would be ‘terribly expensive’ for the country’s 2,300 Catholic primary and secondary schools to provide ritual cleansing facilities. She said: ‘If Muslim parents choose a Catholic school then they accept that it is going to be a Catholic school and there will not be facilities for ritual cleansing and prayer rooms. ‘They do their ritual cleansing before they go to a mosque, but they are not going to a mosque. ‘I don’t think the bishops should go looking for problems. Where will it stop?’
Exactly the point, it won’t ever stop, the list of grievances and demands will go on and on until the host society is conforming to Islamic sharia. Those who help the followers of the madman from the Arabian desert, are useful stooges, no matter how well intended their actions may be. Any Christian or Jewish religious leader that allows for any such tomfoolery, show that they do not have their communities best interests at heart. KGS