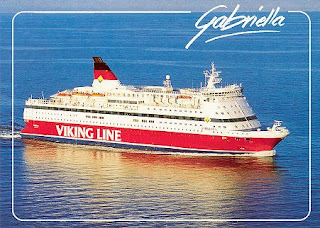 A little over a week ago, the TT traveled to Stockholm for “A Day For Free Speech” seminar, which featured Lars Vilks and his Dogs Musical, as well as a discussion panel followed by a lively debate. The Tundra Tabloids was also given the privilege to do an interview with the esteemed artist, Lars Vilks, which can be viewed here.
But also during the trip, an equally as interesting interview of sorts took place, which was actually a discussion the Tundra Tabloids had with a group of four Iranian gentlemen on board the Viking Line ship, Gabriella.
These ships (and others) ply the Baltic sea between Finland and Sweden everyday, leaving in the evening and arriving the next morning and vice-versa, and are really fun to travel on. One of the extra added benefits is the chance to be met with the unexpected, people that you just casually strike up a conversation with and because you find them interesting, the conversation can stretch even longer because you are really in no hurry to go anywhere, you’re on a ship.
Well during the first few hours of the cruise, I happened to spot a few foreign looking individuals playing cards by themselves, and finding the only available seat in the vicinity, which was next to them, I sat down. It wasn’t long before I struck up a conversation with one of the guys playing, and I asked whether the language they were speaking happened to be Farsi, the most widely spoken Persian language in Iran, to which he replied yes in English.
It wasn’t long before I was playing cards with them, as one of the guys had to leave, what ensued was an interesting discussion of Iranian-US politics and Israel.
One of the more talkative members of the group didn’t speak much Finnish, but spoke English rather well, another spoke better Finnish than English, and the third, well, he knew very little of either and had to have the discussion translated to him. But make no mistake about it, he was very much into the conversation.
One of the first things they told me after finding out that I’m originally from the US, was that they “LOVED AMERICA”, wanted to travel there to both study and to work and live. They all drank alcohol so once can deduce from that that they were not very religious Muslims. They all hated the idea of sharia, stating that it brought no good to their own people, and that the overwhelming majority of the people that they know would love to dump Ahmadinejad and the rest of mullahs.
They also held no grudge against Israel, in fact, they had more interest in Israel than any kind of “knee-jerk” display of animosity towards the Jewish state, and this mind you, after years of relentless propaganda being shoved down their throats since they were born. One of the interesting things that caught their interest was the plight of a famous Iranian blogger, Hossein Derakhshan, that has been arrested for visiting Israel.
They said that the government has been lying about Israel, and after asking how they know that this is the case, they said that they are active Internet users, and news in Farsi is easy to obtain, and without the usual Iranian government filters. They knew somethings about Israel but that was not high on their list of interests, but held it to be interesting nonetheless.
I mentioned to them the fact that the chief Indian Imam came to Israel a few years ago, and found Israel to be a very hospitable place, and that co-existence between Arabs and Jews to be a wonderful surprise, and called upon Pakistan to recognize the Jewish state. Their jaws dropped, not in anger but in amazement and were very keen on learning more about it. All this time we were busy playing the game Spades, and were having a rather good time between ourselves.
I looked one of them and asked, what do you think of Nasrallah in Lebanon, and his calls for death to America? He, (his name was Daweed) replied that the man is a little monkey controlled by an even bigger monkey (Ahmadinejad) and that they were all monkeys the same, big and small. The guy laughed out loud while the third waited for the translation, his eyes went big and he laughed out loud as well.
I also mentioned something to them that’s a reoccurring theme here at the TT, that being, that they should sincerely hope that Iran never gets its hands on a nuclear weapon. One asked why that was, and I responded that, if they think the Iranian regime is repressive now, just wait and see what happens when they achieve the same nuclear status as N.Korea. They immediately understood what I meant.
You know, the world is filled with lots of warm and friendly people, and most importantly, people that can figure things out rather quickly, even after being programmed/brainwashed from birth by the state. These three Iranians give me at least, some sense of hope that nothing is over until the fat lady sings. KGS