Skip to content
Home
/
2008
/
November
/
24
/
Uncategorized
/
Back From The Lars Vilks’ ‘Dogs Musical” in Down Town Stockholm…….
Facebook
Twitter
Google+
LinkedIn
Pinterest
The Tundra Tabloids is back, having just returned from Stockholm Sweden, where I was present at the “A Day For Freedom of Speech” which was sponsored by the Swedish Humanist Society and took place in the heart of Stockholm, at the ABF Hus. (Arbetarnas Bildningsförbund. Workers’ Educational Association, an old social democratic organization – good to see them standing up for free speech.) 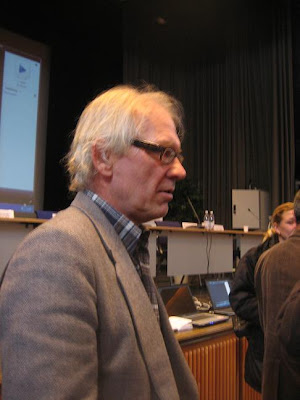 The guest of honor was none other than Lars Vilks, the famed Swedish professor of art theory who drew the famous cartoon of the Roundabout dog with the head of Mohamed. “A Day For Free Speech” was designed with the thought in mind to play a musical stream of videos by Lars Vilks, in which three of the videos captured the same philosophical twist found in the original Monty Python version of “The Life of Brian“. This time however, it was based on the Life of Mohamed, aptly named, “The Life of M”. 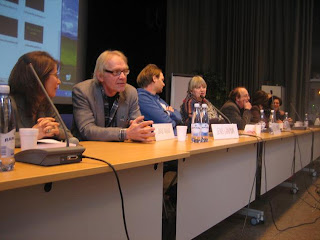 From the very beginning, Vilks’ videos set the tempo, with “Dogs” taking the viewer from, abuses given, to protests and criticisms and death threats leveled at the wondering artist, whose only crime is being born with a too clever of a mind, in a sea of oafish boars.
The videos were a masterful display of imagery and music, humour and word play, combined with a sweeping indictment of the buffoonery that ensued from the initial censorship by the curators at the dog picture exhibition, and all in the exact words of the people who just didn’t get what Lars Vilks was up to.
After the Dogs Musical ended, a panel of important speakers that included Lars Vilks, Jens Ganman, writer, Rebecca Hybbinette, Ingwar Åhman-Eklund from humanists Stockholm, Ellis Wohlner, humanists Stockholm, Maryam Namazie, chairman of the Central Council of Ex-Muslims in England, and Mina Ahadi, chairman of the Central Council of Ex-Muslims in Germany.
The Tundra Tabloids was granted an exclusive interview with Lars Vilks himself, and after everything is written up and uploaded to You Tube, The TT’s own faithful list of viewers will be privy to the first ever interview of Lars Vilks after his Dogs Musical. Stay tuned. KGS
NOTE: More here in Swedish on the Musical, an update in English is promised soon.