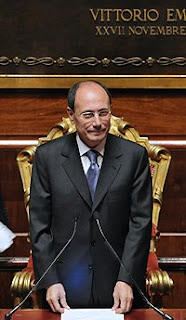 Moments of clarity in politics.

ANSA: The Speaker of the Senate, Renato Schifani, has claimed that “there are still too many ambiguous voices being heard, among intellectuals and in the media, over the legitimacy of the existence of the State of Israel”.

Mr. Schifani grabbed the opportunity to renew support for Israel at the inauguration of a photographic exhibition named ‘Israel – 60 Years’ held at the Senate Library in Piazza della Minerva. During a recent visit to Auschwitz, Mr. Schifani said that “we are all Israelis”.

Mr. Schifani made the point that behind the anti-Zionism which argues against the birth of the State of Israel are the seeds of the anti-Semitism which gave rise to the death camps. “My words”, said the Senate Speaker, referring to his visit to Auschwitz, “have looked to some people like an unnecessary confusion between the Holocaust-hit Jewish people and the State of Israel.

“My intention, on the other hand”, continued Mr. Schifani, “was to link the two threads of this awful story, denouncing the trend of residual anti-Semitism, which still thrives in some – although luckily few – European societies, hiding behind a mask of anti-Zionism”. “Anti-Zionism does not apply to those who criticise single aspects of Israeli policy….”

I am reminded of an exchange I had with a gentleman outside the auditorium of the Finnish Film Foundation in Helsinki, while we were waiting for the doors to open for the seminar where OIC Secretary General, Ekmeleddin Ihsanoglu was scheduled to speak. During our conversation, the subject of Israel and the Palestinians came up, and the once highly reserved individual began to immediately launch into a tirade about how much of ‘criminal state’ Israel was for being in the West Bank and for being in violation of international law, ad infinitum, ad nauseam.

I won’t bother going into all the details, but it’ll suffice to say that the man was one step away from declaring the whole state null and void, but he didn’t dare step over that line, at least not with me, though he clearly wanted to. You had to be there.

Though being a self proclaimed expert on international law, he hadn’t a clue about the differences between UNSC chapter 6 & 7 resolutions, nor that the UN General Assembly has long since been taken over by the Islamic voting block of the Arab League, OIC and the Non-Aligned Movement. None of that mattered to him, only that “Israel was in violation of international law”. (read=criminal state)

Such a person, though highly intelligent, well mannered (to a point) and an admitted, avid follower of international affairs, couldn’t understand that the UN has acted unjustly over the past 40 years, in much the same way as the formerly segregated states in the United Stated acted against African Americans in the Old South.

Then, Blacks faced the same racist situation, always finding themselves being in violation of one law or another, which conveniently landed them before a judge, then on a chain gang or at the end of a rope. By using the same logic that the anti-Israel crowd employs, one could point to the laws passed by these formerly racist states, and declare that Blacks were indeed criminals, for they were caught acting against state law, while never taking into account that the motivations of the people who passed these laws, and that their actions alone were criminal, not the people they were accusing.

Thus, the UN General assembly has been guilty over the years of a process that they alone started, which placed the demonization of Israel as one of its main goals. By passing these terribly biased non-binding resolutions against Israel -not with justice or concern for both parties in mind- the UNGA set in motion a campaign of legitimized demonization of Israel so that fools, such as the person I was debating with, and the enemies of Israel, can point a finger to, and declare that “Israel is in violation of internal law“.

The propaganda machine has been very effective, which can be seen in how both the media and politicians mouth Arab talking points, without ever really pondering over the actual facts. Never mind the fact that Israel’s being in the West Bank or formerly in Gaza was never illegal, and that the resolutions passed against it never had the UNSCR full approval (read=legality).

So the recent words issued by the Speaker of the Italian Senate, Renato Schifan, are timely and welcomed, and hopefully will gain both familiarity and acceptability in the public discourse where Israel is concerned. Renato Schifan is a true friend of Israel and of the truth. KGS