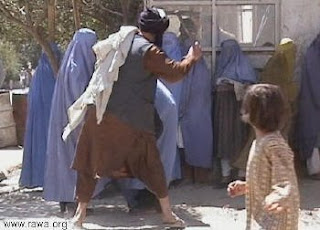 Anytime someone comes around pimping the message that Muslim women are treated fairly under Islam, point them in the direction of this post at the Tundra Tabloids. I came across this video of an Egyptian lawyer, calling for Arab men to sexually harass Israeli women, it’s Nagla al-Imam’s version of human rights for females.

Nagla al-Imam: “If you’re going to sexually harass and rape Muslim women, please brothers, do it to Jews as well”.

There is a group in Egypt that does in fact address sexual harassment, and given their location, Egypt, it’s an understatement to say that they face an uphill struggle in spreading awareness of the problem, let alone casting it as a shameful act. But anyways, here’s a woman who cares for none of that. She’s all for the ‘brothers’ getting into faces of Israeli girls and …elsewhere. What a piece of work. KGS

MEMRI TV:
Following are excerpts from an interview with Egyptian lawyer Nagla Al-Imam, which aired on Al-Arabiya TV on October 31, 2008.

Interviewer: Egyptian lawyer Nagla Al-Imam has proposed that young Arab men should sexually harass Israeli girls wherever they may be and using any possible method, as a new means in the resistance against Israel.

Interviewer: We have with us the lawyer Nagla Al-Imam from Cairo. Welcome. What is the purpose of this proposal of yours?

Nagla Al-Imam: This is a form of resistance. In my opinion, they are fair game for all Arabs, and there is nothing wrong with…

Interviewer: On what grounds?

Nagla Al-Imam: First of all, they violate our rights, and they “rape” the land. Few things are as grave as the rape of land. In my view, this is a new form of resistance.

Interviewer: As a lawyer, don’t you think this might expose Arab youth to punishment for violating laws against sexual harassment?

Interviewer: Does this also include rape?

Nagla Al-Imam: No. Sexual harassment… In my view, the [Israeli women] do not have any right to respond. The resistance fighters would not initiate such a thing, because their moral values are much loftier than that. However if such a thing did happen to them, the [Israeli women] have no right to make any demands, because this would put us on equal terms – leave the land so we won’t rape you. These two things are equal.

I don’t want young Arab men to be interrogated. I want these Zionist girls with Israeli citizenship to be expelled from our Arab countries. This is a form of resistance, and a way of rejecting their presence.

H/T: Atlas and via the Sheik

NOTE: Egypt is one of the Arab countries that has signed a peace accord with Israel.