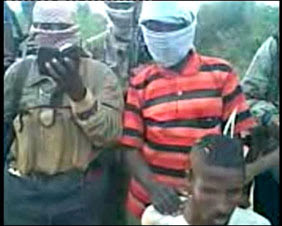 This horrifying account of brutality is just business as usual for the ‘true followers’ of the madman from the Arabian desert. They slit the poor man’s throat before slicing off his head, and then displayed it to the crowd that had gathered in expectation of a promised feast.

The horrified crowd received a horror show instead.

NAIROBI, Kenya, October 27 (Compass Direct News) – Among at least 24 aid workers killed in Somalia this year was one who was beheaded last month specifically for converting from Islam to Christianity, among other charges, according to an eyewitness.

The militants had intercepted Mohammed and a WFP driver, who managed to escape, earlier in the morning. Sources close to Mohammed’s family said he converted from Islam to Christianity in 2005.

The eyewitness, who requested anonymity for security reasons, said the militants that afternoon gathered the villagers of Manyafulka, telling them that they would prepare a feast for them. The people gathered anticipating the slaughter of a sheep, goat or camel according to local custom.
Five masked men emerged carrying guns, wielding Somali swords and dragging the handcuffed Mohammed. One pulled back Mohammed’s head, exposing his face as he scraped his sword against his short hair as if to sharpen it. Another recited the Quran as he proclaimed that Mohammed was a “murtid,” an Arabic term for one who converts from Islam to Christianity. . . .

Mohammed remained calm with an expressionless face, never uttering a word, said the eyewitness. As the chanting of “Allah Akubar [Allah is greater]” rose to a crescendo, one of the militiamen twisted his head, allowing the other to slit his neck. When the head was finally severed from the torso, the killers cheered as they displayed it to the petrified crowd.

I take exception to the notion that these men were Islamic extremists, they were just following the actual dictates of their religion, nothing less, nothing more. KGS

Via Debbie Schlussel, who has by the way, an interesting take on the human rights groups and Muslim organizations who have much to say about the myth of Islamophobia, but nothing to say about Muslim brutality against Christians.