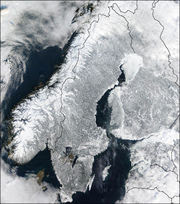 The Nordic mandarins for a multicultural utopia in Scandinavia, were busy at work yesterday restructuring our lives for the future, in a meeting held in Helsinki. Curiously enough, the meeting wasn’t deemed news worthy by any of the Finnish TV news stations, except for a little news blurb at YLE.

But more about the meeting and the agenda being discussed, can be learned by surfing the Nordic Council’s own web site. Under the title of: “The Nordic governments must work together on immigration“, we find out that around 100 parliamentarians from the five Nordic countries and three autonomous territories, of Greenland, Åland and the Faroe Islands, met in Helsinki to discuss how best to:

I doubt that Greenland and the Faroe Islands have anything to worry about (yet) from multiculturalism, but the Åland Islands however, is a different story. It happens to be a Swedish speaking autonomous region in Finland, but regardless of being ferociously independent and watchful over its rights, the Finnish Minister of Immigration and Europe, ‘Auntie’ Astrid Thors, (Swedish Peoples Party) is spearheading the Finnish charge into the multicultural stew being brewed by the EU political elite.
The Finns flirtation with multiculturalism, has already resulted in the first noticeable signs that its Swedish speaking minority’s traditional status is eroding, with the news that Swedish speaking skills will no longer be made mandatory for public servants in Finland. Such news cannot be music to the ears of the approximately 270 000-300 000 Swedish speaking Finns, and one can only predict that a major storm is brewing within the RKP’s political base of support.
So therefor, the news that the Nordic Council wants the region’s policies on “humanitarian migration” to be further intergrated, is just one more shot across the Swedish Finn’s bow, and after the recent drubbing the RKP received in last Sunday’s municipal elections, their core base of supporters (Swedish speakers only) are sending their politicians a serious message. But will they listen? KGS