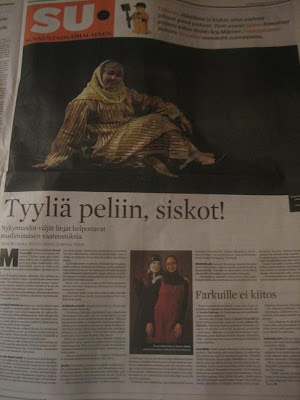 A sign that political Islam is making its presence known in Finland, can be seen in today’s Keskisuomalainen newspaper. In an article titled: “Into Style Sisters!”, the central Finland newspaper makes a big deal about IslamOgarb being such a wonderful thing, even a hit, with many Muslim women around the world, and especially here in Europe.

The article is a classic example of fuzzy headed multiculturalism and political correctness. The article of course had a Finnish Muslim convert and a couple of other Muslim female immigrants who were just thrilled over the chance to wear something other than the traditional drab tents that much of the Islamic female world is forced to wear. 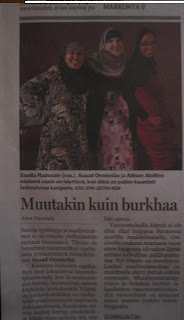 The non-Muslim majority is slowly but surely being conditioned to the fact that they will be seeing more Islam-O-Fashion in their cities and towns, and not give it a second thought. To object or criticize the wearing of such garments is to invite the label of racist, or Islamophobe, and the multiculturalists will be sure to crack down hard.

Never mind the fact such tent-wear is a gross insult to our secular/liberal society. The fact that there are women -and girls-being forced, brainwashed and threatened into wearing such restrictive garments in this day and age, should cause the average person to get spitting angry.

The reason behind Islam’s forcing tent-wear on its females, is that women are considered sinful, promiscuous creatures, and men, severely depraved sexual predators, unable to control themselves at the sight of a woman’s flesh.

So when a female in Islamic garb walks by, by default, she is publically declaring that I am a potential rapist, and regardless of her age, if she were to show an ankle or an elbow, I wouldn’t be able to withstand my carnal urges.

While much of the Islamic world has succeeded in brainwashing their females into wearing the ridiculous garb, now political Islam is trying to introduce its highly offensive ideas here in Europe as well. The Tundra Tabloids categorically rejects the notion that Islamic tent-wear and face mask-wear is an acceptable practice in Europe, or anywhere else in the West, and that it should never be defended under any circumstances.

The moment we in the West start to accept Islam’s backward, anti-liberal thinking, is the moment we start accepting its other intolerant, backward ideas, such as sharia, and apartheid gender policies. I am greatly offended by burkas and veils, and reserve the right to criticize them regardless if it offends others. Such tent-like garments are an offence to one’s intelligence. KGS