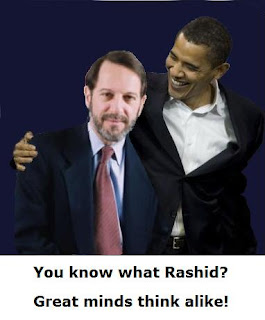 The more the blogosphere rolls up it’s sleeves and does the work of the main stream media, concerning the rising star of Barack Hussein Obama, the more one discovers just how deep humanitarian racism runs within the ranks of journalism, and the public at large.
For those who are not familar with the term, “humanitarian racism”, Manfred Gerstenfeld from the JCPA defines it as:
“someone who attributes an intrinsically reduced responsibility for their acts to people of certain ethnic or national groups.”
When looking at how the US and international media have taken great care in looking the other way in regards to the background of this Democratic candidate, -of which 1/10 would have sank any other Democrat or Republican candidate running for a high office- the only logical conclusion is that they are intentionally giving this guy a free pass.
It’s smacks of racism, in fact it is racism, but of a different sort, because it stems from a misplaced sense of paternalism not unlike what Blacks faced in the segregated southern states of the US. By not holding Barack Obama (for whatever the reasons) to the same high standards that they demand from any other candidate that the media is vetting for the American people, they are by default, guilty of saying that he is not a worthy equal of his peers.
Somehow, Obama needs to be coddled and handled with extra silky gloves lest he preceive that he’s being treated unfairly by the press, when the exact opposite is true. I do however view that most of the media is in the tank with him, kind of collective poking of the finger in the eye of the Republicans for the past eight years, but nonetheless it’s racist to do so.
Martin Kramer has a good remark about “The One” his off the cuff remarks on the scholarship of Rashid Khalidi.
As I said, I have no inside information on the Obama-Khalidi connection. But I did note this statement by Obama, when pressed on Khalidi:
I do know him [Khalidi] because I taught at the University of Chicago [where Khalidi taught prior to his Columbia appointment—MK]. And he is Palestinian. And I do know him and I have had conversations. He is not one of my advisors; he’s not one of my foreign policy people. His kids went to the Lab School where my kids go as well. He is a respected scholar, although he vehemently disagrees with a lot of Israel’s policy.
To which I would ask the candidate in response: What aspect of his “scholarship” do you respect?
Real journalism would demand a curiousity and intellectual interest in finding out the answer to that question. It would help shed some light into the mind and ideology of Barack Hussein Obama, who has a very serious habit of keeping his true ideology a very closely guarded secret, especially from the people he asking to vote for him. KGS