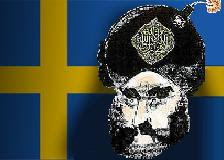 No, the Tundra Tabloids is not referring to the Grand Mosque in Stockholm that was caught selling cassette tapes calling for the murder of all Jews in a Holy War.

In that incident, Swedish Chancellor of Justice, Göran Lambertz, gave the mosque a clean bill of health, in spite of the fact he didn’t have a complete transcript of the entire set of the Arabic languaged based tapes that were openly antisemitic and called for violence against Jews.

Ilya Meyer had much to say about that episode in Swedish jurisprudence. A Swedish source has told the TT that this other mosque linked to the now dead swedish natioanal jihadist, is one of those “cellar mosques” we all hear about.

The Local: Abu Qaswara, the Swedish citizen killed by US forces in Iraq in early October and thought to be a high-ranking member of Al-Qaeda’s Iraq operations, has been connected to a Stockholm-area mosque. US military officials confirmed for the TT news agency that Qaswara died when he detonated a vest filled with explosives after having been shot by US forces.

The incident, which took place on October 5th in the northern Iraqi city of Mosul, makes Qaswara the fourth Swedish citizen suspected of engaging in terrorism abroad to be killed or jailed.

[Tundra Tabloids: remember, this is the same guy that the Swedish TT news service labeled as a …victim. ]

Qaswara, who was born in Morocco and became a Swedish citizen in the 1990s, has been linked to a mosque in the Brandbergen district of the Stockholm suburb of Haninge. The same mosque has also been connected to Ahmed Essafri, another 55-year-old naturalized Swede from Morocco, who is currently serving a three-year prison sentence in the country of his birth after he was convicted of terror-related crimes in June of this year.

Essafri has since appealed his case and Sweden’s foreign ministry expects the new trial to begin some time this autumn, according to TT.

The picture of Qaswara’s activities which has emerged is in line with repeated assessments made by Sweden’s security police, Säpo, in their annual reports about Islamic terrorism in Sweden. According to Säpo, operations in Sweden focus primarily on fund-raising and attracting volunteers to fight abroad.