Skip to content
Home
/
2008
/
October
/
2
/
Uncategorized
/
Andrew Bostom: Islam’s Jew-Hating Hadith Matter Today…….
Facebook
Twitter
Google+
LinkedIn
Pinterest
Yes they do Andy, and during the OIC’s visit planned for this next Tuesday in Helsinki, the TT hopes to get some some “candid” interviews that address this important matter. The truth of the matter is, the OIC is the main international Islamic organization that promotes itself as being a bridge between cultures and religions, but at the same time it undermines that image, by seeking to stifle all criticism of Islam …being a fountain for all sorts of vile anti-semitism and racism and religious supremacy.
Thanks Andy for help bringing these issues to the light of day. KGS

UPDATE: TINSC had this to say in the comments: “The notion that Sharia (Islamic Law) forms a model for government is incompatible with modern democratic values. It appears the OIC is not seeking coexistence as a strategic goal. Rather, the OIC seems to be seeking a dialog for purpose of wearing down resistence of western democracies to Muslim religious rule.” 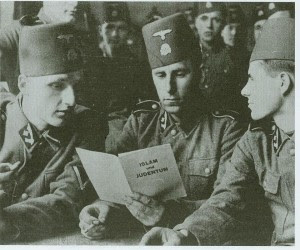 Muslim soldiers of the Waffen SS Hanjar Division reading from a German translation (or directly from the Arabic text) of a pamphlet written by ex-Mufti of Jerusalem Haj-Amin el-Husseini in 1943 entitled, “Islam und Judentum,” “Islam and the Jews.” (Photo from Jennie Lebel’s 2007 biography of the Mufti , p. 311)

Studies conducted in Tel Aviv and in the Palestinian lands occupied by the Jews showed that they plant trees around their homes, because the Prophet Muhammad said that when the Muslims fight the Jews, each and every stone and tree will say: “Oh Muslim, oh servant of Allah, there is a Jew behind me, come and kill him.” The only exception is the gharqad tree, which is one of the trees of the Jews, and if they hide behind it, it will not reveal their presence. According to reports of people who went there and saw it with their own eyes, many Jews plant trees around their homes, so that when the fighting begins, they can hide behind them. They are not man enough to stand and fight you.

Briefly (go here for an in depth online discussion), what are the hadith, and which specific antisemitic motifs do they contain? Hadith, which means “story” (“narrative”), refers to any report of what the Muslim prophet Muhammad said or did, or his tacit assent to something said or done in his presence. (Hadith is also used as the technical term for the “science” of such “Traditions”). As a result of a lengthy process which continued for centuries after Muhammad’s death (in 632), the hadith emerged for Muslims as second in authority to the Koran itself. Sunna, which means “path” refers to a normative custom of Muhammad or of the early Islamic community. The hadith “justify and confirm” the Sunna. Henri Lammens, a seminal early 20th century scholar of Islam, highlighted the importance of the Sunna (and, by extension, the hadith):

As early as the first century A.H. [the 7th century] the following aphorism was pronounced: “The Sunna can dispense with the Koran but not the Koran with the Sunna”. Proceeding to still further lengths, some Muslims assert that “in controversial matters, the Sunna overrules the authority of the Koran, but not vice versa”…all admit the Sunna completes and explains it [the Koran].

The hadith compiled by al-Bukhari (d. 870) and Muslim b. al-Hajjaj (d. 875) are considered, respectively, to be the most important authoritative collections. The titles Sahih (“sound”) or Jami, indicating their comprehensiveness, signify the high esteem in which they are held.
Their comprehensive content includes information regarding religious duties, law and everyday practice (down to the most mundane, or intimate details), in addition to a considerable amount of biographical and other material. Four other compilations, called Sunan works, which indicates that they are limited to matters of religious and social practice, and law, also became authoritative. Abu Dawud (d. 888), al-Tirmidhi (d. 892), Ibn Maja (d. 896), and al-Nasi (d. 915) compiled these works. By the beginning of the 12th century, Ibn Maja’s collection became the last of these compilations of hadith to be recognized as “canonical.”
More here.