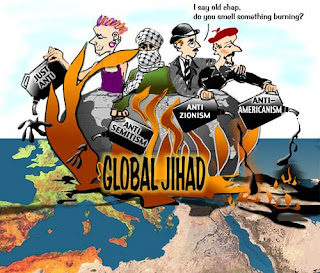 This is of course a very good development. What also should be considered is a department or forum created to follow, as well as to advise, the Israeli government on the increasing Islamization of Europe and the West, something along the lines of an “Israeli Counterjihad division”.
Creating a global counterjihad forum would a good thing for Israel, being even more useful for the Jewish state, than just following jihadis. At least that’s the opinion of the Tundra Tabloids. KGS
“The government has decided to establish a special forum that will deal with threats to Israelis posed by global jihad organizations, both locally and abroad, Army Radio reported Thursday. The National Security Council’s Counterterrorism Bureau chief, Nitzan Nuriel, is expected to head the forum, which will have members from the Mossad, Shin Bet, IDF and other relevant security apparatuses.
The forum will convene at least once every two months, according to the scale of the threats, with the goal of assisting the collaboration of all the security forces in the face of the growing terror attack warnings.” More here.