Skip to content
Home
/
2008
/
September
/
21
/
Anti-Islamization
/
More on Cologne Rally Against Islamization…….
Facebook
Twitter
Google+
LinkedIn
Pinterest
The Baron has more on the rally, with a GOV reader translating local reports on what took place. The insane asylums have been emptied and the patients (Antifa goons, and assorted Leftists and anarchists) are dictating in the streets. Madness, pure madness. KGS

UPDATE:1: There is more, scroll to the bottom for more info on the the rally.

UPDATE:2: CNN reporter labels pro-Köln supporters “as Neo-Nazis” in video report. The woman is clueless as to who the Nazis are, though they are in front of her blocking streets and railways all throughout the city. The media are in bed with these thugs as much as the government. Listen to the journalist/activist, Diane Magnay, then proceed to paint the city of Cologne as bigoted anyways, because they forced the mosque to reduce the size of its minarets. Nothing but total submission to intolerant religionists will suffice for these idiots on the Left, and in the Leftist media. Morons.
NOTE: While we expect radical Lefties to wrongly depict their opposition as “neo-nazis” in order to shut them up and drive people away from what they’re trying to convey, the media has no right in depecting them as such. After all, the media is supposed to cling to the creed of being “fair and balanced”. Eh,…yeah riiiight.
Police confront “goons, loons and baboons” 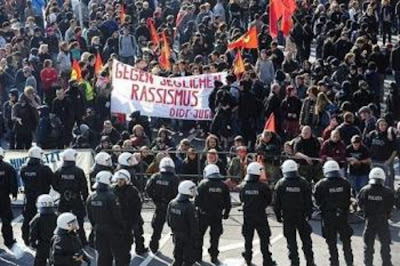 The pic via Atlas Shrugs

The police in Cologne at the last minute prohibited a meeting against Islamization. The security in the city is paramount, said the police. The local group Pro-Köln wanted to hold an anti-Islamization Congress Saturday, for which they invited like-minded people from different countries.

Because of this, the police on Saturday also kept an eye on the Dutch and Belgian border west of Cologne, German media reported.SecurityAccording to the police in Cologne, due to the meeting that is taking place in the center of the city, citizens’ safety is in jeopardy. However, it seems more plausible that opponents of the Congress are causing the insecurity.

Already on Friday there were riots in which extreme leftist and “autonomous” demonstrators agitated against the congress, and initiated an attack on visitors to the meeting against Islamization.

Pro Köln states that action needs to be taken against the encroachment of Islam that threatens the Western and Christian culture of Europe. For example, the group is strongly opposed to the planned construction of a large mosque in Cologne. The colossal prayer house will get two minarets, each 55 meters high. There are at least 120,000 Muslims in Cologne [out of a total population of circa 995,000].

Saturday morning though, thousands of demonstrators gathered in the center of the city. They wanted to block the anti-immigration festivities at the Cologne Heumarkt.

The Christian Democrat [CDU] mayor Fritz Schramma apparently wanted the same. In a speech on Saturday morning he told the counter-demonstrators not to have a very high opinion of the visitors to the happening of Pro-Köln.

VH says, “I just a minute ago read what the CDU mayor of Cologne Fritz Schramma really said to his ‘Anti-Fascist’ and Autonomous Warrior friends on Kölnische Rundschau.”

“These brown Biedermänner [Bieder-men, a smear word for conservative people from the southern hinterland of Germany] are in reality arsonists, racists in bourgeois outfits, subtle fear mongers,” he warned in front of thousands of [Leftist] demonstrators. “This dirty clique of Euro fascists, these Haiders and Le Pens [who wasn’t even planning to attend the Congress] and whatever their names may be, I call to them: There is the exit, that’s the way back home!”

According to Deutsche Welle, “the mayhem also hit rail links. A signal box on the edge of town was set on fire in the early morning by persons unknown, forcing the closure of a main line for several hours and the diversion of 12 national express trains.”

The Independent reported that “Germany’s council of Muslims called the conference an unparalleled abuse of freedom of opinion.”

Piggy Infidel’s translation is below the fold, with timestamps in brackets, starting from 36 seconds into the clip.

[0:47]
“It’s something positive that there are people who, for example, support integration, support open borders ….”

[1:00]
The right-wingers’ meeting began the next morning with a surprise, Pro Köln had invited journalists to a press conference and then unexpectedly switched the location to a ship . However, counter-demonstrators quickly found the new meeting place and then the bottles and stones began to hail down.

[1:18]
Pro Köln had chartered the ship under the guise of planning a meeting of international lawyers; the ship’s owners said they felt they had been misled.

[1:26]
Then the news reached the right-wing politicians on board that the bus tour through Cologne which was planned for that afternoon would not take place because the bus company had cancelled the contract.

[1:35]
The ship drifted up and down the Rhine for hours, without a solution being found.

[1:40]
When they came ashore late in the afternoon the Cologne taxi drivers had also decided not to transport the politicians.

[1:47]
Finally in the evening the police used regular vehicles to drive them back to their hotel, then another surprise: they had to leave the hotel — the management doesn’t want to offer accommodation to “right-wing populists”.