Skip to content
Home
/
2008
/
September
/
18
/
Uncategorized
/
Convergence of The Radical Left in Mälmö Sweden…….
Facebook
Twitter
Google+
LinkedIn
Pinterest
The Tundra Tabloids has been notified through a couple of different sources, that the city of Mälmö Sweden, has co-sponsored an event that began today, which guarantees to bring out the most hardened of multiculturalists and anti-US/anti-Israel activists in the land, the Keffieh’s are a dead give away. 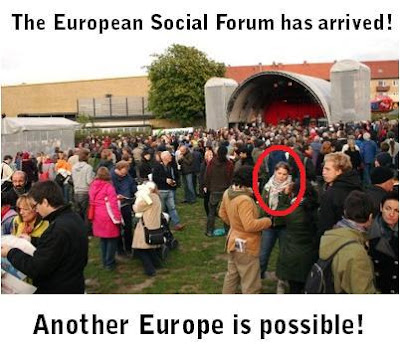 Yeah riiiiight! By “Another Europe”, they mean one that resembles the Europe in which the aboriginal peoples no longer constitute the majority of the population. 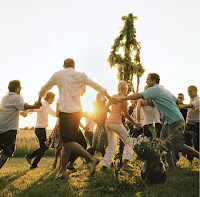 The French no longer drink their wine and sun bathe along the banks of the River Seine. The Finns no longer take to their saunas and roll around in the snow naked afterwards, and the Germans no longer celebrate Oktoberfest.
The Swedes, well, they will no longer care about swinging around the ol’ May Pole at the mid Summer solstice, because such things would surely go against Islamic law you know. One must keep in step with the times.Fantastic you say?! Surely the Tundra Tabloids is guilty of over exaggerating the situation, in trying to conjure up the worst possible of scenarios, never would things go that far, absurd, impossible?! well, if someone were to tell you a mere thirty years ago that the British state had accepted Islamic sharia law to run side by side with its existing judicial/legal system, you would have laughed out loud. Not any more.According to the itinerary of European Social Forum (17-21.09.08), sponsored by the Swedish Social Democrat Party (SDP), the City of Mälmö and assorted big unions (most likely Antifa and Expo will be well represented as well), the following seminars will be made available to the masses assembled:

[In other words, “how we can best implement the EURABIAN project of greater cooperation with the “Global South”]

[Drastically limiting public discourse on multicultural policies that are seen as discriminating by the indigenous populations. Greater enforcement of anti-free speech laws, along with a frequent comparing of notes to help speed the process up]

[One of the more scarier work shops. How we can best implement George Orwell’s instruction manual, 1984 ]OH, BUT THAT’S NOT ALL! NOThere are more seminars that show the finger prints of the radical Left and the multiculturalists.

[From drug warlord Marxist movements in Columbia, to alternative fuels in Brazil, the radical Left intends to right all the wrongs, even if it means plain lying to themselves. Invent sh*t up and package it as an informative seminar, no one will bother to fact check, no one will care!]

[How socialist can you get!? A note to all the Tundra Tabloids regular readers, Iivi Anna Masso was quoted here just the other day, about the dilemma facing Europe. For the EU to recognize S.Ossetia’s and Abkhazia’s independence, would be to admit that the multicultural enterprise -going full tilt here- in Europe, is based on false presumptions. If the mountain people in Georgia can’t get along in a single Georgian state, how in the world can mass immigration of people -not indigenous to the area of Europe- ever hope to get melt into the native populations of the EU?]And what gathering of Lefties and multiculturalists would be complete, without seminars dedicated to the “supposed” chief racists our time?

[In other words, how can we best mobilize ourselves to destroy the Jewish state of Israel?]NOTE: Boycotts againt Israel fail miserably, one after the other. Those who know Israel best, know that the radical Leftist crowd are a bunch of ignorant droids who will say just about anything to conjure up a bad image of the Jewish state.Proof: “One year after Norway’s Socialist Left Party launched its boycott Israel campaign, the importing of Israeli goods has increased by 15%, the strongest increase in many years, Statistics Norway reports.” (H/T: TINSC)There is something incredibly vulgar about the whole event. Perhaps it’s because they mask themselves in “see through” cloak of righteousness, and pretend that their intentions are to right all the world’s perceived injustices, but deep down, the nihilistic side of their utopian ideology gives them away. They care very little for justice, rather, it’s all about payback and vengeance.The question that pops up in my mind is, “I wonder if Antifa and Expo are well represented at the conference, and is Øyvind Strømmen (LGF’s prime source for it’s anti-Vlaams Belang campaign) , present as well, and does that bother Charles Johnson? KGS