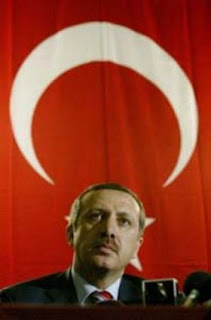 Actually, the Islamist Turkish PM almost has it right, if he were to leave off…”Ophobia” that is.

“And he wants it outlawed, pronto, which will mean that those who dare to expose the Islamic roots of the global jihad and Islamic supremacism will pay hefty fines and spend long stretches in the slammer. Of course, it can’t happen here. Can it?”

“Enmity with Islam ‘crime against humanity,’” by Thomas Seibert for The National (UAE), September 17
(thanks to Jack):

ISTANBUL // In a sign of his simmering anger about what he sees as baseless accusations against Islam in the West, Recep Tayyip Erdogan, Turkey’s prime minister, has called on the international community to declare the enmity against Islam a “crime against humanity”.

Addressing Jose Luis Rodriguez Zapatero, his Spanish counterpart, and about 2,500 other guests in Istanbul at a celebratory iftar meal on Monday, Mr Erdogan said: “No culture, no civilisation should belittle the other, despise the other or see the other as an enemy.” […]

In the Alliance of Civilisations, Mr Erdogan has emerged as a leading representative of the Islamic countries, said Semih Idiz, a foreign policy columnist with the daily Milliyet. As a politician with roots in political Islam and leader of a party that has many pious Muslims among its voters, Mr Erdogan is very sensitive to what he sees as western prejudices towards Muslims, Mr Idiz said.

“Islamic countries are watching closely what he does,” Mr Idiz said about Mr Erdogan’s role in the Alliance of Civilisations. “He is a sort of spokesman, representing the Islamic world in the platform.”But at the same time Mr Erdogan had to take into account that he himself had to take “brave steps”, Mr Idiz said.

After the murders of the Turkish-Armenian journalist Hrant Dink and of three Christians in the central Anatolian town of Malatya last year, the Erdogan government was criticised for not being outspoken enough in its condemnation of the killings.

In his speech at the iftar on Monday, Mr Erdogan stressed the need for a dialogue without prejudices.

“The principle mission of the Alliance of Civilisations is an effort to understand each other correctly,” he said. The fear of Islam that has spread in the West, a development he called a “paranoia”, makes it harder to reach that aim, he said.

Mr Erdogan has criticised the West for harbouring “Islamophobia” before, saying that Muslims felt “under siege”. But this time, the prime minister went further, accusing the West of trying to define values of a global civilisation all by itself.

“We think that civilisation is global, and that civilisation cannot be interpreted like an ideology that belongs to the West,” he said. After a first international forum held in Madrid in January this year, the Alliance of Civilisations will hold its second forum in Istanbul in April. Mr Idiz said the platform had become a vehicle to defuse tensions between the West and the Islamic world.

“We saw that after the cartoon crisis,” he said, referring to the anger in the Islamic world after the publication of cartoons depicting the Prophet Mohammed by a Danish newspaper in 2005. At a meeting in Doha in Feb 2006, members of the alliance discussed ways to calm the waters after the crisis….

And then there are our EU mandarins and cheerleaders who choose to laud the positive attributes that Turkish EU membership would bring to Europe, while failing to mention any of the negative ramifications that such a membership would have on its future. Tayyip Erdogan knows exactly what this future would look like, and he’s not pulling any punches, he states his views very clearly. It’s a world in which Islam enjoys complete immunity from criticism.

Don’t be fooled by the “moderate” Islamists’ speech of “tolerance”, what they actually mean is, that they themselves will define for the rest of us, just exactly what is, and what is not, acceptable criticism. What their “visionary message” actually boils down to is, tolerance for anything that Islam deems acceptable.

It’s the Tundra Tabloids opinion that Turkish EU membership would only further help to accelerate Europe’s departure from its own religious, cultural, political and historical moorings, something of which Europe seems intent on chucking aside anyways, through its four decade long anti-Europe, anti-common sense policies vis-a-vis the Islamic Middle East and Maghreb.

Everything that made Europe great, is slowly being impaled upon that post of multiculturalism and European self hate. Adding a Turkish state to Europe would only help speed the process up.

There is a plague of insanity running amok on the European continent that refuses any care, any help or sound treatment. It is truly a case of the patients running the asylum, and no help is in sight, save for a few brave exceptions. KGS

Fjordman warns us:
“This story is extremely serious. The European Union is now about to do what senior officials have already agreed upon years ago in meetings with Muslim nations, as documented by Bat Ye’or in her book about Eurabia :To officially recognize sharia law in European countries:
Muslims living in EU countries will in future be able to divorce according to sharia law. This is the belief of the EU Commission, which recommends that a couple be able to choose which country’s law they will follow if they divorce — as long as they have some kind of connection to the country they choose. Because of Danish opt-out provisions, the EU regulation will not have a direct impact on Denmark.
But Danish People’s Party EU spokesman Morten Messerschmidt is still greatly concerned about the proposal: “It’s a completely lamebrain idea, the possibility that the Commission will use inhumane sharia laws in the EU,” he says to MetroXpress. Aalborg University EU expert Soren Dosenrode concludes that this is a spanner in the works of the government’s ambition to abolish opt-outs. “It will clearly make it harder, because people are concerned about just this sort of far-reaching proposal.”