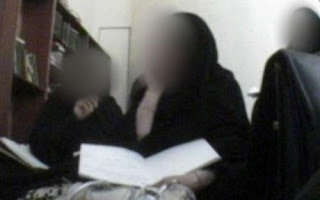 Imagine the surprise and shock of the Channel Four investigative journalist that: “NOTHING HAS CHANGED”!

A year-and-a-half after the critically-acclaimed film Undercover Mosque was first screened, Dispatches goes undercover again to see whether extremist beliefs continue to be promoted in certain key British Muslim institutions. The film also investigates the role of the Saudi Arabian religious establishment in spreading a hard-line, fundamentalist Islamic ideology in the UK – the very ideology the Government claims to be tackling.

A female reporter attends prayer meetings at an important British mosque which claims to be dedicated to moderation and dialogue with other faiths. She secretly films shocking sermons given to the women-only congregation in which female preachers recite extremist and intolerant beliefs. As hundreds of women and some children come to pray, a preacher calls for adulterers, homosexuals, women who act like men and Muslim converts to other faiths to be killed, saying: “Kill him, kill him. You have to kill him, you understand. This is Islam.

“Worshippers are repeatedly told they must lead separate lives from non-believers and not tolerate other religions. Christian teachings are described as “vile and disgusting, an abomination.” And at private, invite-only prayer meetings linked to the mosque, the reporter films the leading preacher from the women’s prayer circle issuing strict dictats on women’s personal freedoms – decreeing they must not travel far without a male member of the family to escort them, and instructing them not to integrate with British society or work in a non-Islamic environment.

In the same mosque, the reporter visits the bookshop and discovers books and DVDs still on sale, promoting extremist, anti-Semitic, misogynistic and intolerant messages. Unbelievers (‘kuffaars’) are described in one DVD as: “Evil, wicked, mischievous people – you can see the evil in their face”. Whilst Jews, “have abominated, filthy, disgusting gross belief – their time will come like every other evil person’s time will come.”

Moderate Muslims and Islamic academics tell Dispatches they reject and condemn these teachings. Dispatches traces the links between the teachings and materials at the mosque and the Saudi Arabian religious establishment, and examines the extent to which Saudi Arabia exports such teachings around the world through the funding of literature, schools, mosques and other organisations.

Oh, and don’t forget the moderates and Islamic academics! They say they condemn the harsh teachings, but just happen to fail in mentioning exactly where these preachers of hate and fear get their prophet’s words and teachings all wrong. Do they in fact openly distance themselves from Mohamed’s racist, violent teachings…or do they just speak ambiguously about the Qur’an and that it actually preaches a message of peace and love”? There is much much more, just click here and see for yourself.

The Telegraph has it here as well:

“Friendship with non-Muslims is discouraged because “loyalty is only to the Muslim, not to the kaffir [disbeliever]”. A woman who was friendly with a non-Muslim woman was heavily criticised: “It’s part of Islam, of the correct belief, that you love those who love Allah and that you hate those who hate Allah.”

“Some conditions can take you into disbelief, to take the British citizenship, whether you like it or not, for these people, you are selling your religion, it’s a very serious thing, it is not allowed to give allegiance to other than Allah.”

Their teachings shocked me. This was not the Islam that I and many other Muslims in the UK were taught as youngsters, nor is it a version that most Muslims follow.”

Ah but you see, regardless of whether it was taught in the past or not, it’s right there, smack dab in the middle of gentile old Britain. The reason behind this that the non-violent Islam practiced by most of Britain’s Muslims, is just a watered down version of what the prophet of Islam himself both lived and taught others. The Muslim believers in the watered down version of their prophet’s religion, have nothing to offer their violent, racist coreligionists, in the way of defense of their non-violent, secular behaviour and outlooks.

It’s why they (the believers in a watered down version of the prophet’s religion) have lost one mosque after another to the Islamist supremacists, and are presently either in denial (offering apologetics) or leading the charge of “IslamOphobia and racism”.

For anyone not familiar with the Dispatches series, the Tundra Tabloids reposts the entire series. KGS