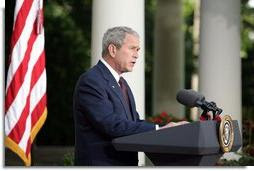 President Bush tells the Russians to back off. Perhaps we are seeing another misstep in action, as the Russian invasion of Georgia is not being greeted with weak knees and hand wringing as was hoped, but with a solid front of defiance and resolve.

THE PRESIDENT: I just met with my national security team to discuss the situation in Georgia. I am deeply concerned by reports that Russian troops have moved beyond the zone of conflict, attacked the Georgian town of Gori, and are threatening the Georgia’s — Georgia’s capital of Tbilisi. There’s evidence that Russian forces may soon begin bombing the civilian airport in the capital city.

If these reports are accurate, these Russian actions would represent a dramatic and brutal escalation of the conflict in Georgia. And these actions would be inconsistent with assurances we have received from Russia that its objectives were limited to restoring the status quo in South Ossetia that existed before fighting began on August the 6th.

It now appears that an effort may be underway to depose Russia’s* duly elected government. Russia has invaded a sovereign neighboring state and threatens a democratic government elected by its people. Such an action is unacceptable in the 21st century.

The Georgian government has accepted the elements of a peace agreement that the Russian government previously said it would be willing to accept: an immediate cease-fire, the withdrawal of forces from the zone of conflict, a return to the military status quo as of August 6th, and a commitment to refrain from using force. There are representatives of the European Union and the Organization for Security and Cooperation in Europe currently in Moscow seeking Russia’s agreement to this peace plan.

Russia’s government must respect Georgia’s territorial integrity and sovereignty. The Russian government must reverse the course it appears to be on, and accept this peace agreement as a first step toward resolving this conflict.

Russia’s actions this week have raised serious questions about its intentions in Georgia and the region. These actions have substantially damaged Russia’s standing in the world. And these actions jeopardize Russians’ relations — Russia’s relations with the United States and Europe. It is time for Russia to be true to its word and to act to end this crisis.

Also worth noting is the fact that the US not only airlifted Georgian troops from the front lines in Afghanistan, but has also taken the step in directing US naval ships and planes to distribute humanitarian aid. With US military personnel in the war theatre, the Russians are being served a warning from Washington.

In the actions that Georgia and Russia have taken thus far, the Tundra Tabloids views both of having read the field wrong. While it was of course the Georgians right to send in troops to a region in their own state, they misread what the Russians would do. And just like the Georgians, Moscow has misread US resolve, it appears that there are indeed “red lines” that can’t be crossed. KGS