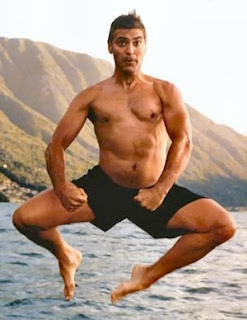 HAHAHAHAHAHAHA! Time to wake up people, if this is the case, then the Democrats have thrown themselves on a smoking pyre, there’s not a snowball’s chance in hell that they’ll win the White House. No way.
Any presidential candidate worth his or her salt, is going to trust only those “experts” that have been in the business for some time, not a Hollywood playboy cum radical idealogue like Clooney. What a joke. Please someone please tell me this is a sordid joke!
“George Clooney once famously declared he could never run for public office because he’d ‘slept with too many women, done too many drugs and been to too many parties’. But now the Hollywood heart-throb has entered the political arena at the highest level – by becoming an unofficial adviser to US Presidential front-runner Barack Obama.
Oscar-winner Clooney, 47, is said to be helping the Democratic candidate to polish his image at home and abroad. But he is also sharing with Obama his strong opinions on Iraq and the Middle East.
Sources say the actor has tried to hide the pair’s friendship for fear his Left-wing views and playboy image would hurt the Presidential hopeful’s bid for the White House. But Democratic Party insiders have revealed that Clooney and Obama regularly send texts and emails to each other and speak by phone at least twice a week.
One said last night: ‘They are extremely close. A number of members of the Hollywood community, including Brad Pitt, Ben Affleck and Matt Damon, offered to help raise funds for Barack but it was with George that he struck up this amazing affinity. ‘George has been giving him advice on things such as presentation, public speaking and body language and he also emails him constantly about policy, especially the Middle East.
‘George is pushing him to be more “balanced” on issues such as US relations with Israel. ‘George is pro-Palestinian. And he is also urging Barack to withdraw unconditionally from Iraq if he wins. ‘It’s a very risky relationship. His hope of becoming America’s first black President depends heavily on winning over conservative voters and it would be suicidal for him to be perceived as a tool of a Hollywood Leftie, which is how they regard George. ‘But they text and email each other almost every day and speak on the phone at least a couple of times a week, often more.’”
Clooney is a clown and a self important clot, the only thing funny in all of this, is that he’s found someone who really thinks he has something of importance to say,… B.Hussein Obama. Let the two wine and dine and intertain the other, let the advice flow, it’ll be fun to watch Republicans pick apart Obama’s ME policy that has Clooney’s hand prints all over it. More here. KGS