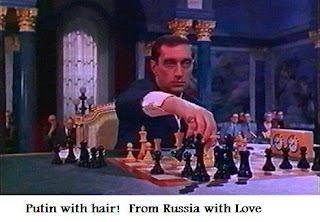 From Russia with love? The Russians have the hapless state of Georgia in firmly in its grip (read = complete air superiority). Tbilisi is reeling from the Russian offensive, and I just can’t see it holding out much very much longer.

Regardless that the TT believes that it was a very foolhardy move by the Western friendly leader -and his advisers- to advance on S-Ossetia in the way they did, the Tundra Tabloids hope that they are not totally taken apart by Moscow before a cease fire sets in.

But let’s be clear here, S-Ossetia (like it or not) is a part of the Georgian state, and Saakashvili had every right to send in Georgian troops into the region in order to bring the province under its control. Russia however, did not. The problem as I see it, is one of short sightedness bordering on folly, how in the world did they think Russia would not respond in the way they did?

The mighty gamble taken by the Georgian leadership has now ended in retreat, and for what, a region of goat farmers? They could have tried to make Georgia proper into an attractive alternative to what lies north of the border, but insisted on going toe to toe with the Ruskies. Not a smart move regardless of the justifications. The Russians just gave the West a wake up call, with its (intended?) near miss of the all important oil line running through the south of Georgia.

The Russians are sending a coded message to the West that “they should think twice before admitting Georgia into NATO”. They (the Russians) are making a very big and loud statement that Georgia is just too “loose of a cannon” fro the West to handle, being totally responsible for the unleashing of Russia’s over-the-top military response.

What looks like from the periphery, a fight solely between Russia and Georgia, is actually something that involves both Europe and the US. Putin is indeed sending a veiled message to the West that it won’t allow NATO near its soft under belly, as well as telling the EU that it’s reasserting its weight in the region. The Cold War may be over, but Russia still very much intends to dictate the peace. KGS