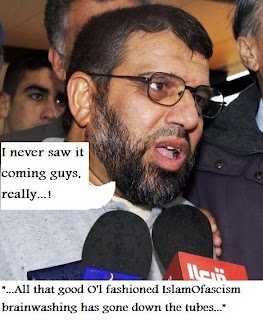 Hamas leader, Sheikh Hassan Yousef, is now scratching his head and offering apologetics. All of his hard work in training his son, Masab, to be a good IslamOnazi and hate Jews and Christians has been for naught.
Haaretz: ” The son of a Hamas MP who is also the most popular figure in that extremist Islamic organization, a young man who assisted his father for years in his political activities, has become a rank-and-file Christian. “I’m now called Joseph,” he says at the outset. Masab knows that he has little hope of returning to visit the Holy Land in this lifetime.”
I know that I’m endangering my life and am even liable to lose my father, but I hope that he’ll understand this and that God will give him and my family patience and willingness to open their eyes to Jesus and to Christianity.
All the apologists for Islam should be wondering why Masab Yousef would be saying that leaving the ROP could endanger his life. Now if anyone still questions as to whether the war being waged against Israel is just about borders, and justice for Palestinians (read = creation of Palestinian state), read the following:
“Nor does he attempt to hide his affection for Israel, or his abhorrence of everything representing the surroundings in which he grew up: the nation, the religion, the organization. “Send regards to Israel, I miss it. I respect Israel and admire it as a country,” he says.
“You Jews should be aware: You will never, but never have peace with Hamas. Islam, as the ideology that guides them, will not allow them to achieve a peace agreement with the Jews. They believe that tradition says that the Prophet Mohammed fought against the Jews and that therefore they must continue to fight them to the death.”
The Tundra Tabloids has been saying the same thing for years. It’s all about Islam and the religious intolerance and supremacism it breeds amongst its followers. Yes there are peaceful Muslims, but there is no such thing as a peaceful Islam. *L* KGS