Skip to content
Home
/
2008
/
July
/
21
/
Hezbollah
/
Just Can’t Help Myself…….
Facebook
Twitter
Google+
LinkedIn
Pinterest
Yes, the news of this picture has been around for a few days, but I couldn’t help myself, the picture says so much with so little. It’s the UN’s observance of UNSCR 1701 with a middle finger. *L* KGS

Israel is calling for removal of two United Nations soldiers from Lebanon after photographs surfaced of the soldiers saluting the coffins of Hezbollah terrorists during a prisoner exchange Wednesday. Associated Press photographer Mohammed Zaatari captured an image of the troops paying homage to fallen Hezbollah fighters as trucks bearing their coffins drove through the city of Tyre in southern Lebanon.

The blue-helmet U.N. troops, who operate under the auspices of the U.N. Interim Force in Lebanon (UNIFIL), are meant disarm Hezbollah in southern Lebanon and be an impartial buffer along the country’s border with Israel. Israel’s ambassador to the United Nations, Dan Gillerman, said he was “shocked and horrified” by the photograph and that it was time for the saluting soldiers to go. 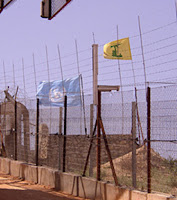 “I think they should be recalled and be sent back to whichever country they came from,” said Gillerman. “I think they’ve definitely compromised their impartiality and have in a very big way, in a very serious way, compromised the integrity of the United Nations.” But a UNIFIL spokeswoman said the salute was nothing out of the ordinary.

UNIFIL would find no problem with that immoral dislpay, wouldn’t they? Is there any wonder why the Hezbollah finds no problem in displaying its flag next to the pale blue and white flag of the UN? *L* KGS