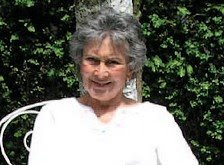 The Tundra Tabloids had the great honor of meeting this wonderful person during the Brussels Counter-Jihad conference back in 2007. Don’t let Bat Ye’or’s small stature fool you, when this woman begins to speak, the room grows silent. It’s not through a loud voice that she gains attention, but by the delicateness of her demeanor and the sharpness of her intellect. What a treasure of a human being.

‘I always thought I’d be writing novels,” says Bat Ye’or, her wistfulness somehow adding an extra touch of class to her thick French accent. “Not such serious work.”

Given the gravity of her subject matter, and what some might consider her alarmist way with words, this is hard to believe. But then, so is the historian’s life story, which is the stuff that sagas are made of.

Hers began in Egypt during World War II. The daughter of a middle-class Jewish family named Orebi, Bat Ye’or (her trademark pseudonym, which in Hebrew means “daughter of the Nile”) fled with her parents to England in 1957 – after suffering the brunt of the anti-Semitism she claims characterized the entire Arab world.

In 1959, she married a Briton – also a historian – whom she prefers not to name, to protect his and her privacy. The couple then moved to and settled in Switzerland in 1960, where they raised their children and continue to reside.

She is the author of eight books, including The Dhimmi: Jews and Christians under Islam (1985); The Decline of Eastern Christianity: From Jihad to Dhimmitude (1996); Islam and Dhimmitude: Where Civilizations Collide (2001); and – the one which captured international attention and catapulted her into the center of controversy – Eurabia: The Euro-Arab Axis (2005). Saying that Europe is basically finished, due to its kissing up to the Arabs, will do that.

Here recently to promote the release of her best-selling “cautionary tale” in Hebrew (EuroArabia, Schocken Publishers; translation by Arie Hashavia), Bat Ye’or explains why she believes the West in general, and Europe in particular, is in state of denial at best, and dhimmitude at worst. To make matters more complicated, she asserts, though the citizens of European countries long to preserve their individual and collective cultures of freedom and democracy – which they have been exhibiting at the polls – the European Union, influenced by the UN-backed Islamic leadership, advocates appeasement and passivism.

In an hour-long interview on the terrace of her Mishkenot Sha’ananim digs overlooking the Old City of Jerusalem, Bat Ye’or expounds on her bleak prognosis in an articulate tirade, raising her voice now and then for emphasis, pausing occasionally to laugh. What she has to say about the state of the world, however, is more likely to make one cry.