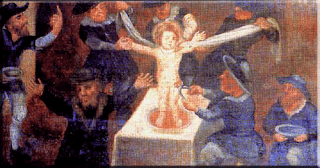 PMW has uncovered another blood libel being disseminated by the Palestinian’s own government, you know, that “moderate” leadership of Mahmoud Abbas, president of the Palestinian Authority.

Palestinian Media Watch: The Palestinian Authority is intensifying its longstanding blood libel campaign against Israel, falsely accusing Israel of conducting horrific Nazi-like medical experiments on Palestinian prisoners. These fabrications have been featured repeatedly in the Palestinian Authority’s official newspaper, Al-Hayat Al-Jadida, which is under the direct authority of Mahmoud Abbas. In the past week alone there were three new examples of this libel:

“The method employed by the Israeli Occupation in which they [are] instigating slow death … doctors in Israeli prison clinics use the prisoners as guinea pigs for clinical drug testing under the pretense of ‘treatment.'” [Al-Hayat Al-Jadida, July 6, 2008]

“Many of the male and female inmates received injections from needles they had not seen before, and which caused their hair and facial hair to fall out permanently … others lost their sanity, or their mental condition is constantly deteriorating… and some are suffering from infertility.” [Al-Hayat Al-Jadida, July 4, 2008]

“The doctors in these prison clinics are using the prisoners as guinea pigs for clinical testing of drugs and treatment-methods.” [Al-Hayat Al-Jadida, July 3, 2008]

That is the reason why any hopes for peace in the near future with the “moderates” is nothing but an illusion. As long as the Palistinian leadership refuses to prepare its people for peace, there will be no peace, it’s that simple. More here. KGS