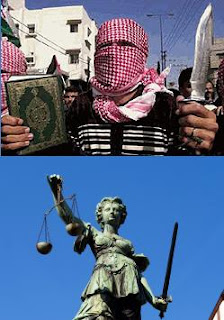 The Tundra Tabloids’ definition of ‘litigation jihad’: “A non-lethal means by which Islamists carry out their holy war against the infidel whenever the use of violence is not an option.”

The British Muslim Initiative, (like its US cousin CAIR) is a front or ‘fig leaf’ organization for the Palestinian terrorist organization, Hamas. The reason why they are in the news, is that they have recently fired a warning shot across the bow of the British website called ‘Harry’s Place’.

The BMI is threatening “legal action” for the website’s publishing of a quote uttered by its president Mohammed Sawalha at a demonstration condemning the recent Jewish community’s pro-Israel rally that celebrated Israel’s 60th Day of Independence. The BMI is upset that Harry’s Place

“quoted a piece (translated from Arabic) stating that Mr. Sawalha had described the Jews in Britain as evil/noxious.”

Harry’s Place had used an Al-Jazeera report on the demonstration attended by Sawalha, in which he stated: “to express our resentment at the celebrations by the Jewish community”. But as Harry’s Place has it, being the Hamas minded Islamist that he is, Mohammed Sawalha couldn’t hold his rhetoric to a bare minimum, he just had to let it all hang out.

HP: He also made another statement, which has been the subject of some dispute. Al Jazeera initially reported the phrase in question as containing the word “الوبيل”. That word translates as “evil” or “baneful”, or some variant thereon. The next word was “يهودي “, which means “Jew” or “Jewish”. We translated the phrase, as it appeared, as “evil Jew” or “Jewish evil”. Some time later, the word “الوبيل ” was removed from the Al Jazeera report. It was replaced with the word “اللوبي ”, “lobby”. The British Muslim Initiative then issued a bombastic “press release”, which it pasted in our comments section, claiming that we had:
“deliberately skewed the word ‘Lobby’ to turn it into some other word and make it seem as though it means ‘evil/noxious’”
It went on to describe Mr Sawalha as a promoter of “community relations and cultural dialogue”, and object to him being ”demonised” as a “‘Jew-hater’ and ‘anti-Semitic’.”
I do not know Mr Sawalha. However, if he is a senior Hamas activist, and a supporter of that organisation, I cannot imagine he has anything positive to contribute to “community relations”. Moreover, it is very unlikely that any British court would regard it as defamatory to describe a Hamas activist as a racist. Hamas is a proudly racist, and genocidal terrorist organisation.

This is a classic example of Islamists dissembling before the non-Muslim community. “We didn’t actually say that! You are misrepresenting what was actually said!”, in spite of the fact that it was taken straight from an Al-Jazeera report. To further complicate matters, the Islamist friendly news organization conveniently changed their original report to now read “evil lobby”.
Nice to have an ace up your sleeve when it’s needed, and Al-Jazeera is ready to help out!

Barry Rubin explores the modus operandi of the Islamists and their useful stooges in the western media, who pretty much help out the Islamists in much the same vein as Al-Jazeera.

BR: There is one case after another of this situation. Some make global headlines like the Dura case, where French television covered up its staged broadcast claiming that Israel killed a boy in Gaza even when a French court found it was phony, or the supposed Jenin massacre, reported on the basis of one unknown Palestinian witness and maintained by many even after the UN found it phony.

As so often happens, however, the response of Sawalha and company was neither to affirm proudly their views–which are typical of Hamas and Muslim Brotherhood propaganda in the Arab world–nor to back down but to fabricate and attack. It reminds me of the time that a BBC stringer in Gaza made a pro-Hamas speech which appeared on that group’s site. When Israel complained, the speech was quickly taken down. The BBC then said it could not investigate the issue since there was no remaining evidence. The fact that a “screen shot” existed of the article did not move them from that stance. Or when Islamist terrorism leads to criticism the response of Muslim individuals, institutions, and regimes is to put a far lower priority on rejecting or reinterpreting the specific texts used by the Islamist terrorists than to claim “Islamophobia” on the part of the critics. And so Al-Jazeera simply changed the wording of the interview’s text to read: “Jewish lobby” instead of the “evil Jew.” As an aside, note that “evil Jew” is a far more vicious statement than “evil Jews.” After all, the latter implies opposition to those Jews who support Israel while the former pushes the idea that Jews are innately evil, an idea that is usually or almost always present in Hamas, Islamist, and a great deal of general Arab discourse. At any rate, the British Muslim Initiative then issued a press release they put on the “Harry’s Place” site but not on their own. (As so often happens with the language switcheroo, the radicals don’t want their own supporters to know about their moderate pretenses or understand that they know it is all a con-game). More here

The Muslims who are waging a physical and psychological jihad against the West, are also waging a highly successful propaganda campaign as well. They need to keep their base support well motivated with extremism, while they pepper the non-Muslim media with words of moderation and tolerance. Just watch how Hamas does it! Arafat did much of the same, and he was supposedly the……. “moderate”. Yeah riiight.

The other weapon in the jihadists’ arsenal is the litigation machine, which threatens those who are able to read between lines of the jihadists’ public messages, or get a hold of the speeches and sermons giving in private settings, with the latter being the most damaging. Remember the Dispatches series by UK Channel Four “Undercover Mosque“? The news station was afterwards investigated -due to the complaints leveled by the Muslim community- for being “Islamophobic”, in spite of the documentary showing the mosques’ own imams and leaders preaching highly intolerant and racist messages.

That is the reality of the jihad campaign being waged against us here in the West, which focuses more on intimidation and dissembling and litigation than on violence and mayhem. But all of the methods and means employed by the jihadis are as divisive as they are destructive, and are used interchangeably in order to keep the non-Muslim host society off balance. In order to defeat it, you have to be able to spot it and that’s exactly what the bloggers at Harry’s Place did.

The Tundra Tabloids offers its heartfelt thanks to Harry’s Place, and to all other bloggers, speakers and activists who dare to stand in the breach for the rest of us. We owe you all more than could ever be repaid. More here. *L* KGS

A SPECIAL NOTE OF THANKS: The Tundra Tabloids deeply appreciates the fact that Pamela Geller posted this entire post at Atlas Shrugs. How cool is that? *L* KGS