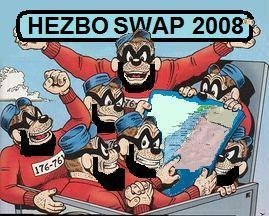 It goes without saying that the Tundra Tabloids feels for the family of Ehud Goldwasser and Eldad Regev, and the plight of the soldiers themselves.

What is most disturbing is that the trading of cold blooded murder, Samir Kuntar, for the bones of the two soldiers will only encourage future kidnappings.

YNET: “Day after cabinet approves prisoner swap deal with Hizbullah, prime minister says, ‘In no way can I call such a decision a good decision. It’s a painful affair’; adds solution for soldier held by Hamas won’t be easy .”

It is as certain as setting of the sun, that Israel’s enemies will be soon planning how best to snatch more soldiers, most likely killing them first in cold blood, and then barter for their bones. It’s a policy that has worked over the decades, and won’t end soon as long Israel keeps up with the practice. What’s even more troublesome is the slated release of the unrepentant child murderer, Samir Kuntar.

PMW: According to the Palestinian Authority leadership, Samir Quntar epitomizes the ideal Palestinian prisoner. Quntar, who crushed the head of four-year-old Eynat Haran with his rifle, is serving four life sentences for murder in an Israeli prison, but is almost certain to be freed in a prisoner swap with Hizbullah this week. On one hand, Quntar embodies what the PA considers the “heroism” of terrorists fighting Israel. On the other hand, he’s the ultimate symbol of all terrorist prisoners who have murdered Israelis and will eventually be freed as a result of future kidnappings or through some other means.

Right now Hamas leaders are stepping up their demands on who should be released for Gilad Schalit: “Gaza strongman Mahmoud Zahar, speaking to the independent Al-Quds radio station, said Hamas would take advantage of this decision “to release people Israel accused of having blood on their hands like Samir Kuntar. We have to take advantage of this to release our prisoners.”