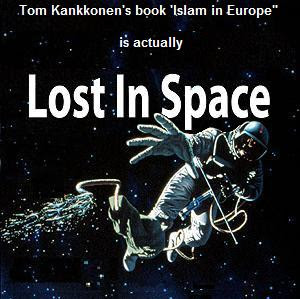 Both Vasarahammer and Kumitonttu inform the Tundra Tabloids that Finnish state TV journalist, Tom Kankkonen has completed his book titled “Islam in Europe“, and that he mentions yours truly, KGS, somewhere in the book.

How flattering is that?

Vasarahammer has written a review of the just released book, and for those of you who read Finnish, it can be found here. For those of you aren’t literate in Finnish, I’ll provide a few of Vasarahammer’s observations in this post.

According to Vasarahammer, Tom Kankkonen’s book does indeed contain “a few pearls” about Islam in Finland, but unfortunately it’s also outweighed by a seriously ideological Left-wing laden bias that juxtaposes radical Islamists with those who are both highly critical of Islamism, as well as being very skeptical about Islam itself.
VH shares with the reader some of the more worthwhile portions of the book, like how Kankkonen shares the fact that Europe needed foreign workers during the boom years of the 60’s and early 70’s, but after the bottom fell out of the economy during the oil crisis, Muslim immigrant workers refused to leave the host states in which they lived.
Kankkonen also reveals that the difference in approaches to both France and Britain’s handling of their Muslim immigrants -with secularism being in the former and multiculturalism in the latter- have brought very little in the ways of success. France has Muslim youths rioting in the streets and torching cars, while London has second generation Muslim youths blowing themselves up in the subway system.
He also interviews Finland’s Islamic Council spokesman Anas Hajjaria, the FIP’s Abdullah Tammi and an imaam Khodr Chehab, who runs a small mosque for immigrants in Helsinki. The Tundra Tabloids has noticed that all three have given troubling statements about their support for sharia. Only Hajjar has been very careful to not come out strongly in favor of it, but occasionally he lets his mask slip.
One glaring point brought up by Vasarahammer, is that Kankkonen reveals that during the interviews, the subject of Saudi money making its way to Finnish mosques was mentioned. It’s unclear who mentioned the intrusion by the House of Saud into the Land of sauna, Sibelius and Sisu, but for once, it’s out there in the open. Also, the Saudis are now planning to build an embassy in Helsinki, any connections there?
So for that contribution Tom Kankkonen earns the Tundra Tabloids’ thanks. But that’s where the thanks end.
According to Vasarahammer, Kankkonen’s book attempts to address the concerns of those who have been warning of what open ended Muslim immigration means to the future of Europe. But what is served up instead is a dishonest caricature of those who view the current situation with “eyes wide open” as…Islamophobes. How quaint, lazy and intellectually dishonest.
He goes on further to discredit his own work in his moral equivocation of radical extremists, with those of us who point out the glaring irregularities in EU/state governmental policies that only serve to encourage Muslim extremism and anti-democratic and anti-secular behaviour. With his wielding of the highly provocative label of “Islamophobe”, he neatly places those people who are justifiably worried over the future of their “hard won” civil liberties, upon the “bonfire of his own vanity”.
For you see….Kankkonen has “done some research” over the past year or so…more than likely using the hard Leftist -and Swedish state sanctioned- EXPO as his prime source material. EXPO has been very carefully debunked as a de-facto “red shirt” shock troop organization that seeks to instill a climate of fear in all those who are opposed to their own Islamization and colonization. The EXPO organization is one of those groups that get a free pass (and bill of health) from the Swedish state and media, even though its very foundation was built upon the premise of hatred towards white Caucasians. The blogger Fjordman writes more on EXPO here.
QUOTE from the GOV pages: “One of the co-founders of Expo, Tobias Hübinette, wrote in 1996: “To feel and even think that the white race is inferior in every conceivable way is natural with regards to its history and current actions. Let the Western countries of the white race perish in blood and suffering. Long live the multicultural, racially mixed and classless ecological society! Long live anarchy!”
That is the mindset which Tom Kankkonen most likely draws his source material from, since its the only native IslamOfriendly organization in the Nordic region (that I know of) that has followed the Counter-Jihad conference and participants. EXPO has even mentioned (pdf) the Tundra Tabloids as one of the participants to the “dreaded” conference that had took place in Brussels last year in 2007.
Here is a quote from Tom Kankkonen’s book Islam in Europe, where he mentions the TT’s country report given at the 2007 conference:

Well Tom Kankkonen misses the mark rather widely. First and for most, the Tundra Tabloids focuses on Islamism, and the political correctness that allows it to take root in the West. Tom Kankkonen’s book (so far) looks like something that exemplifies today’s politically correct attitude towards Islam. He doesn’t appear to be cognizant of the fact that Islamism stems from Islam, and that there is a danger in allowing, in masse, umpteenth number of Muslims into Europe before their religion has under gone a thorough reformation. I must be an alarmist then, or worse yet…a “provocateur”. It wasn’t out of shyness that the TT chose anonymity, it was due to the politically correct elite that can chose at any time of their liking to haul the “offending party” before the magistrate for the mere sin of expressing…….an opinion. The dread and shock over that one Kankkonen must think…we have free speech laws in Finland…no need to fear. Yeah riiiiiight.The report Kankkonen mentions, spoke of the number of Muslim immigrants….not just immigration. The Tundra Tabloids has absolutely no problem with immigration or immigrants in general, including Muslim immigrants, providing that they are of the “modernist persuasion”. There is no room in Europe or in the West for that matter, for people who have no loyalty to the concept of a liberal democracy and a seperation of mosque and state. Any Muslim who supports the institution of Islamic law (Sharia) and seeing it take hold (in any shape or form) in Europe, is not welcome.

The report also said that the media is pro-Palestinian, which Tom Kankkonen’s employer, YLE most certainly is, though it likes to pretend otherwise. And yes the Finnish media does in fact prostrate itself at the alter of the EU and the UN. The slavish mentality projected in the reporting by the Finnish MSM is most certainly hair raising as it is telling. All hail the UN & EU!Yuck. I will take the time to read Tom’s book, and perhaps post on it again in the near future. Special thanks to both Vasarahammer and Kumitonttu for the heads up, and to Tom Kankkonen, for at least exposing the Saudi funding of Islamic mosques in Finland. He does deserve at least that much credit. *L* KGSNOTE: It would be good if Tom Kankkonen took a closer look at the LEFT (which the National Socialists belong to), and see why EXPO’s rehtoric and militant activities mirrors that of the Fascists. I believe that such a ground breaking book has been long overdue. Don’t you?