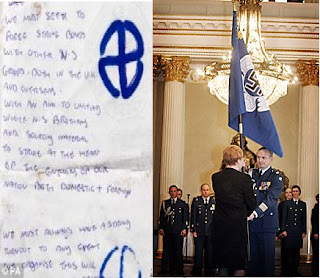 The Counter-Jihad gets “Johnsoned” once again by the LIDLESS EYE!

Staying true to form, the proprietor of the LGF “OBFUSCATES” the truth about the alliance between all the bloggers and political movements within the Counter-Jihad.

CJ: “Here’s one of those people that some “counter-jihad” bloggers still think we should make our allies, one of those tough guys capable of taking on a little dirty work: Hitler-obsessed loner found guilty of planning race war – after child-porn police found stash of nail bombs under his bed in raid.

And in his hate-filled diaries, that symbol again — the symbol that countless apologists for European neo-fascism insist is completely meaningless. Interestingly, Gilleard seems to have viewed the Odin’s Cross as a mutated swastika.”

The Counter-Jihad Charles Johnson is referring to is the collection of bloggers, writers, authors and intellectuals that gathered in Brussels last year, and then again in Vienna this Spring in 2008, to help form a concentrated front against the Islamization of Europe. At no time has there ever been a call for an alliance with Neo-National Socialists whether they be “The Front” or the British BNP”.

Shame on Charles Johnson -or as we say here in Finland: “Hyi Sinua“- for trying to smear a decent movement made up of hundreds of individuals that are nothing of the sort that he claims they are. CJ is still conducting a witch hunt, or as it will be known hence forth and forever more as “JOHNSONING“, against good, decent and most importantly innocent people, who can never offer enough evidence on their behalf to satisfy the self imposed standards of the “LIDLESS EYE“.

No matter what they say, and importantly, what they do, will ever be enough to absolve them from the “smearing tar of Fascism” that Charles at LGF brandishes like a cruel inquisitioner with a clanging hangover. So CJ once again tries to lay down the law as to what a symbol means to everyone who uses them.

Again, I ask both CJ and any of his lizardroids, does the same logic hold for the president of Finland and the Finnish army, due to the symbol displayed on the flag in the picture? You can’t have it both ways, unless you intend to “JOHNSON” both the Finnish president and the Finnish Defence force as well? *L* KGS

NOTE: The Counter-Jihad has never been about race or ethnicity, but about ideology. The fact is, the man in question is a hard core racial supremacist, who hates Jews. His kind would never find a place within the rank and file of the Counter-Jihad, which is openly pro-Israel, philo-Semitic and not anti-Muslim, but against their “Jihad Ideology and Sharia Law”, which are totally unacceptable in our modern day democratic societies.
If Islam was void of those dangerous elements just mentioned, that contribute to the discrimination against women as well as against other forms of minorities, then there would be a need for a counter-jihad. Pure and simple.
UPDATE: The Baron informs the TT about a post recently published at the GOV concerning a Vlaams Belang member, Maria De Berlanger, that was thoroughly trashed by LGF members for being a Nazi. She has been found blameless in charge leveled against her for giving the “Hitler salute” while being sworn into office.
Yes folks, this woman had been “JOHNSONED” by LGF’ers who besmirched her name thoughout the blogosphere. As the Baron pointed out about apologies being sent in her direction by the LGF crowd…….crickets chirping.