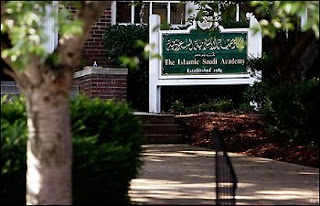 Sorry, but the Tundra Tabloids has been extremely busy since this past Tuesday, and will continue to be so up until next Monday evening, so the posting till then will be very, very light.

Upon opening the email box, I noticed straight away that the Baron from the Gates of Vienna left an interesting email about a protest held in Virginia this past Tuesday, where people gathered to protest the hate literature at the Islamic Saudi Academy.

From all accounts it appears that the protest generated a lot of publicity, with both the Washington Post and the Washington Times covering the story. The latest brouhaha to envelope the Islamic Saudi Academy involves the arrest of a top official at the school, Abdalla Al-Shabnan, for obstruction of justice. It appears that the school official withheld key information from authorities involving a 5-year-old girl at the academy having fallen victim to sexual abuse by a family member.

The protesters to the opportunity to also highlight other irregularities at the Islamic Saudi Academy, like hate literature supporting the killing of apostates and that Jews conspire against Islam and its people.

Protesters on Tuesday said the director’s arrest was another sign of trouble at the academy. The textbook review conducted by the federal panel focused on 17 books used during the last school year and obtained from independent sources.

The Washington Times: An armed guard guides visitors to the school Tuesday while monitoring the Islamic Saudi Academy grounds. The passages found in the review include a 12th-grade Koranic interpretation textbook that states it is permissible for a Muslim to kill those who have left the faith and one that says “the Jews conspired against Islam and its people.”

“They don’t have a First Amendment right in this country to incite violence against other groups,” said Christine Brim, an official with the District-based Center for Security Policy.
At one point, staff and children affiliated with the academy brought bottles of water to the protesters, who gathered near a sidewalk in front of the school holding signs with slogans like “Murder is not a religious freedom” and “Stop Teaching Kids Jihad.” But the groups soon began arguing.

But wait, here comes the disinformation by a spokesman for the Academy! Remember, the protesters have found ample, credible information that the literature being used within the Academy does in fact teach such hateful ideas. The Saudis teach it at home and spread it abroad, with many such similar findings having been discovered in a number of Saudi funded mosques throughout the US and elsewhere.

“That’s absolutely not true,” said Rahima Abdullah, the school’s education department director. “What we teach here is love and tolerance.”

HAHAHAHA. What a pack of lies. Rahima Abdullah is spinning the standard version of “al-Taqiyya 101 for the infidel“. Three cheers to the folks that took the time to protest the Islamic Saudi Academy’s hate doctrine, and talk to the media. The Baron takes not that the much of the protest was videoed, and can be found here.

The Washington Times offers a much better detailed reciting of the events, with the Washington Post being…the typical WaPo, that writes a shortened version of a “he said/she said” type of article. Kudos to all of the protesters for a job well done! *L* KGS