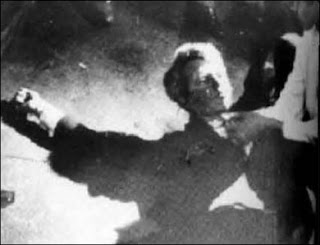 Whenever the bleeding heart apologists for Palestinian terrorism demand for yet, more and more sympathy to be shown towards the world’s,

…“worst example of a people supposedly working for its self determination“…

please keep in mind then the cold blooded murder of American diplomats and the assassination of Robert Kennedy.

…Sirhan Bashir Sirhan was not faceless or motive-less. He knew precisely why he pulled the trigger. RFK was his enemy and the enemy of his people. Sirhan’s father and presumptive teacher, Bishara, said after the assassination:

Kennedy was promising the Zionists to supply them with arms and aircraft…and thus provoked the sensitive feelings of Sirhan who had suffered so much from the Jews…It is not fair to accuse my son without a full examination of Zionist atrocities against the Arabs – those atrocities which received the support and blessings of Robert Kennedy.”

Fully aware of the date — one year to the day — of the outbreak of the 1967 Arab-Israeli six day war, Sirhan Sirhan planned to kill RFK for his staunch support of Israel, evinced by many of his speeches during the Democratic primary race in California. At the Neveh Shalom Synagogue Kennedy said, “…in Israel — unlike so many other places in the world — our commitment is clear and compelling. We are committed to Israel’s survival. We are committed to defying any attempt to destroy Israel, whatever the source. And we cannot and must not let that commitment waver.”

“Sirhan was a self-appointed assassin. He decided that Bobby Kennedy was no good because he was helping the Jews. And he was going to kill him.”

The Palestinians have been murdering people in cold blood as long as can be remembered, it’s what many of them know how to do best, because they don’t want to learn anything else. The Tundra Tabloids has sympathy for the average Arab in either the WB or Gaza that longs for a normal life without violence and blood shed (there are a few).

But lets face it, the majority of these Arabs voted terrorists into power and believe that one day Israel will be weakened to a point where the very frabric of Israeli society will be fractured, thereby ending the public’s will to defend itself. Every time I review stories like the RFK assassination, it angers me to no end, that these people have gotten away with so much, and with so little being expected from them.

They have been leaching off the international community for generations and have nothing…. absolutely nothing to show for all the hundreds of billions of dollars being dumped in their laps, and surprise, THEY STILL SCREAM FOR MORE!

The TT is for closing down the UNRWA, stopping the flow of money from the WEST into the PA, and demands that the ARAB/Muslim world pick up the tab instead. No state should be even contemplated until the Palestinians can prove that they are indeed building a democratic state with protection for their minorities, respect for civil law, and has publically condemned and stopped all incitement of Israel and Jews in all of its various media. And that’s just for starters.

Thanks to Solomonia for the heads up on the post, as well as the reminder of just how much the Palestinians have done to create ill will for the rest of the world, as well as compound the misery for their own people and their neighbors. More here. *L* KGS