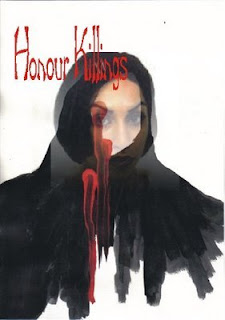 The story wrenches at the heart. It’s a story that continually repeats itself in the Islamic world, where a family’s sense of “honour” outweighs the right to life for any female who is judged to have sullied the family’s good name.

The relationship was innocent, but that did not help her. She had not seen the soldier since January, but on March 16 her father learned of the friendship, the newspaper said.

He stamped on her and suffocated her, then hacked at her with a knife, calling out all the time that his honour was being cleansed, the report said. When she was being put into the ground, her uncles spat on her covered corpse, the newspaper added.

The father was arrested, held for two hours, then released without charge, it said.

That’s it in a nutshell isn’t it? Women are property, they’re to be seen but not heard, to be enjoyed but not to indulge in enjoyment, to give birth but not to have a say in their private lives. When they appear to have strayed from their lot in life, they are brutally murdered in order to save the male sense of honour.

The system protects the evil doers while the victim is left to lie in the road collecting dust on its broken body. What on earth is wrong with these people, that they can murder their own daughters with such an evil twist of logic? Each and every “honour-killing” is like a solid fist punch to the stomach, no matter how many times you get hit, you never get used to the impact. God help us all. More here. *L* KGS