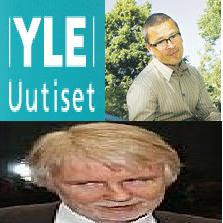 In last night’s 20:30 news broadcast, YLE news interviewed University of Helsinki’s Hannu Juusola (University lecturer in Semitic Languages and Cultures) concerning Hamas’ complete takeover of Gaza. Making a long story short, surprise surprise Israel and the Quartet (US,UN,EU and Russia) are to blame for the unrest for their role in boycotting Hamas.

But that’s not all. With the hope of driving “their” point home, the news anchor himself, Arto Nurmi, invokes the name of a former foreign minister Erkki -ol’ scruffy- Tuomioja (SDP) to help buttress Juusola’s claim that the West erred in by-passing Hamas. Of course the former FM, “Eki”, believes that Hamas should have been recognized by the Quartet and not have been boycotted, that goes without saying.

Nurmi: We just saw how Hamas was celebrating in Gaza, with the West in support of Fattah, what comes next?

Juusola: The first question is whether the conflict will spread, first to the WB and then elsewhere. I believe though some kind of compromise will be struck and it won’t spread. Jordan and Egypt will use all available diplomatic means to help contain the situation.

Nurmi: Is this to Israel’s advantage that both sides are fighting between themselves?

Juusola: Yes and no. I’ll say that it contains many positive sides for Israel. Israel has had a long policy of trying to divide both areas from the other, and now it has become a reality. And on the other hand Israel’s government has not wanted to involve itself in any serious negotiations and the public are not pressing them for any, but on the other hand if the unrest travels to the WB, then it will become a serious threat. And finally if the breaking up of the Palestinian government happens, the end result will be chaos and Israel might be held responsible for the situation, which for Israel, is a very problematic situation. I’ll say this that, Israel’s situation is interesting, concerning the advantages and the pitfalls.

Nurmi: Palestinians are now at civil war, is the idea of peace now to be shelved?

Juusola: We have to remember that it’s been seven years since the last attempt at peace and since then nothing has been attempted since. We have a situation that sees the international community not willing to seriously involve themselves in the peace process, we have a weak Israeli government not willing to negotiate, and a Palestinian camp that has two PM’s and one president. It’s difficult to believe that in the short term, that there will be any serious negotiations.

Nurmi: Erkki Tuomioja (former FM) said this morning that the West made a serious mistake in not taking Hamas seriously after the last election, are you of the same opinion?

Juusola: Absolutely, former FM, Erkki Tuomioja is right to a major degree, many experts agreed shortly after the elections that any attempt to close off the Hamas will lead to chaos, and a state of war, and that’s the situation where we are right now.

Here you begin to see the hardened mindset in Finland, that dismisses all responsibility from the Palestinians’ concerning their bad choices, no matter how many they make and for how long. It is reminiscent of an over indulgent mother with an alcoholic son, regardless of his actions, he can be assured that Mom will always be there to accept his excuses and exonerate him while placing the blame elsewhere.

According to YLE, Juusola and former Finnish FM, Erkki Tuomioja, it’s both the Quartet’s and Israel’s fault for the current situation due to their rejection of Hamas, not the intolerant, racist, Islamist supremacist ideology of Hamas. Once again rain is seen defying gravity in their immoral “alter universe” these boobs have created for themselves.

What is also interesting is that the news anchor, Arto Nurmi, never sought the opinion of the present Finnish FM, conservative Ilkka Kanerva (National Coalition, KOK.). They really do miss ol’ scruffy Tuomioja at YLE..don’t they? *L* KGS